When It Rains It Pours!

Unfortunately, whoever came up with that saying wasn’t kidding!  When Craig bought our house there were signs of a past leak on the ceiling in the family room.  And in the attic around our chimney was an intricate series of buckets and basins.  For the first few years we never noticed a leak and the buckets in the attic always appeared to be dry, so we just chalked it up to a past problem.

Well we were wrong!

This past summer we had a couple heavy rainstorms back to back and we noticed water trickling down the back side of the chimney (which happens to be the brick wall in the family room).  We quickly called a roofer who came out, inspected the roof, and said the leak was likely from cracks in the caulking around the flashing.  He resealed everything and told us that if the problem continued he would come back out and replace some of the shingles around the chimney.  Wouldn’t you know it, another heavy rainstorm popped up not long after that and we noticed the same dripping water down the brick wall.  The roofer did indeed came back out and replace a section of the shingles around the chimney.  Fortunately, that time it fixed the leak!

Or so we thought!

About a week before the start of our kitchen renovation (about 8 to 9 months after the first roofer came out and “fixed” things) we noticed the leak was back.  Let’s just say we were far from happy about the situation!  We called another roofer who came out, assessed the damage, and again resealed the flashing around the chimney.  He thought that the water could also possibly be finding its way in through the right side of the chimney that had been left open to the elements after the removal of the old furnace (which had been taken out long before we ever owned the house).  He blocked off the opening for the right side of the chimney and told us that this (and the resealing around the flashing) should do the trick.

Last Monday (the same day that our new drywall was completed), we had another heavy rainstorm.  Which led to more leaks all around the chimney.  While I frantically tried to wipe up the water that was dripping down the brick wall in the family room, Craig went into the attic to try to find the sources of the leaks.  We wrapped old towels and sheets around the chimney to try to prevent the leaks (definitely just a Band-Aid fix) from getting into the house and ruining our brand new family room ceiling.  In addition to the leaks around the chimney we discovered another leak in the roof… this one over the living room ceiling (definitely glad we found that sooner rather than later).  The towels and sheets quickly soaked through, so we ended up positioning nearly a dozen buckets, tupperware containers, etc. below them to catch the water as it dripped from the saturated towels.  We were up until around 1:00 a.m. Tuesday morning trying to figure out a way to stop the water. 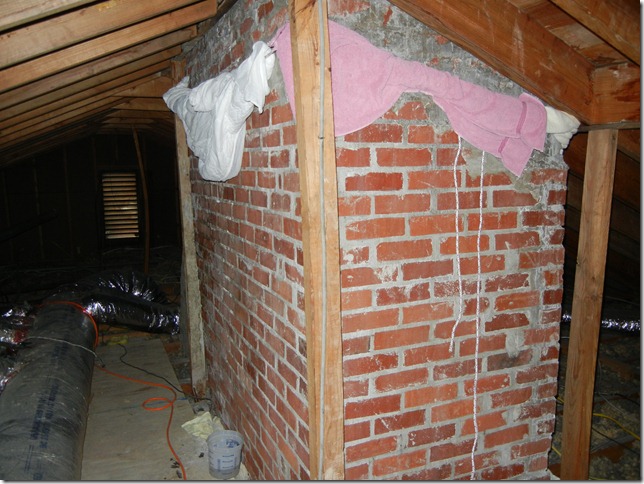 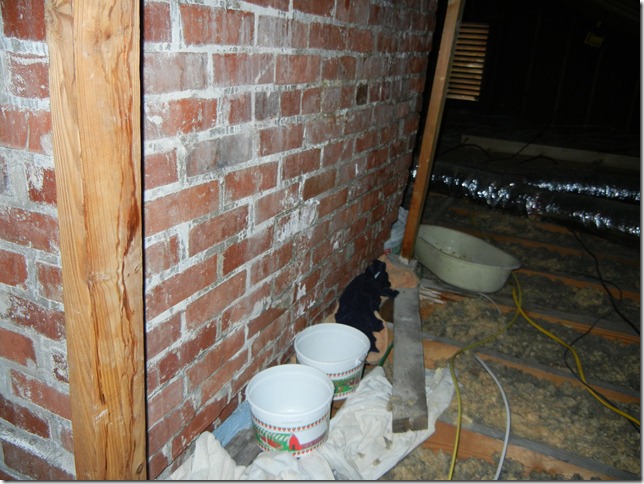 Eventually exhaustion took over and we decided that there was nothing more we could do and just went to bed… worried sick about what we would wake up to!

Thankfully, either the rain stopped not too long after we went to bed or our crazy “water dripping onto towels dripping into buckets” system worked because we woke up to dry sheetrock and lots of water in our buckets!

So, Tuesday afternoon Craig climbed up onto the roof and covered the entire chimney with a tarp. 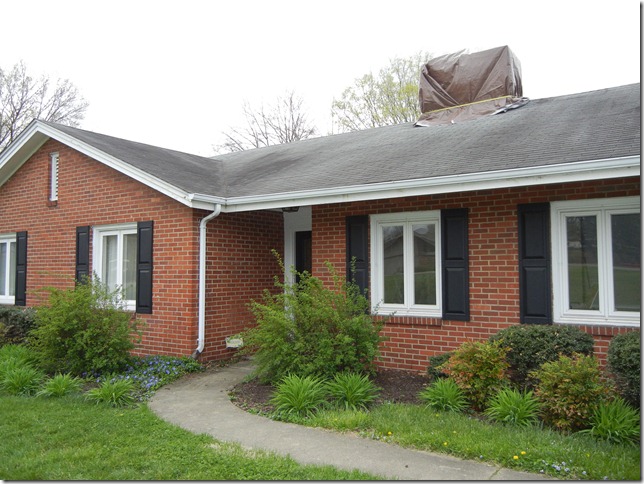 We are now in the process of getting bids from roofers to replace the roof.  We hadn’t really planned for this since we are in the middle of a kitchen renovation, but I guess this is just one of those “joy of being a homeowner” things.  Gotta love it!

UGH. So sorry to hear about that! What a pain!