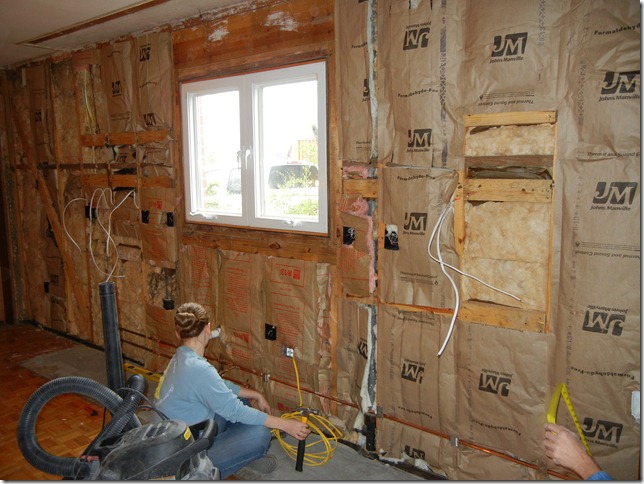 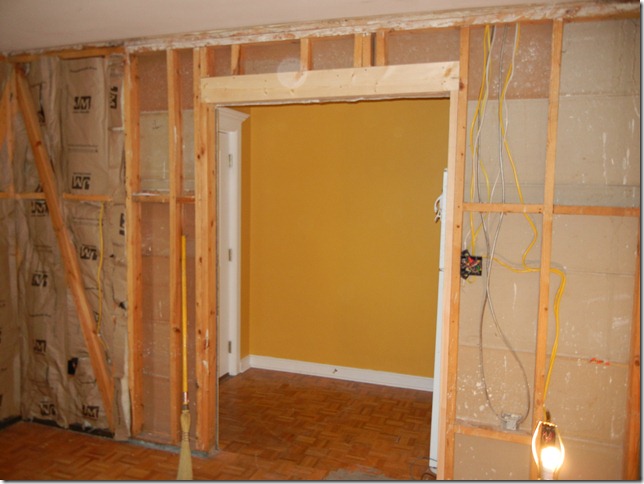 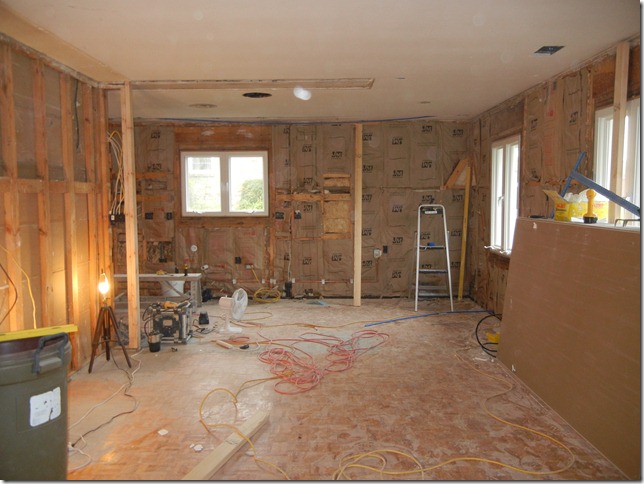 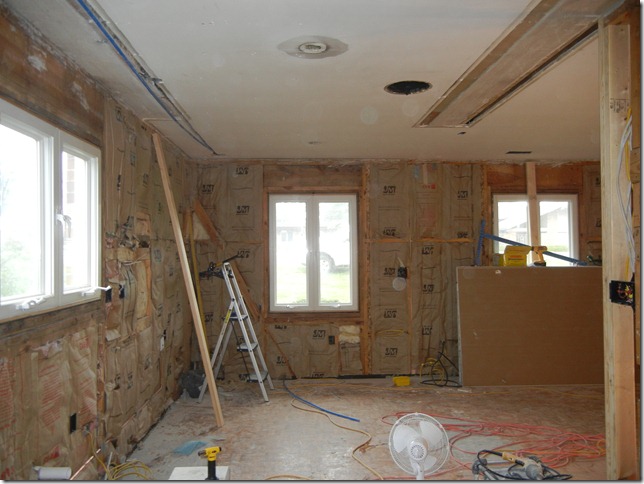 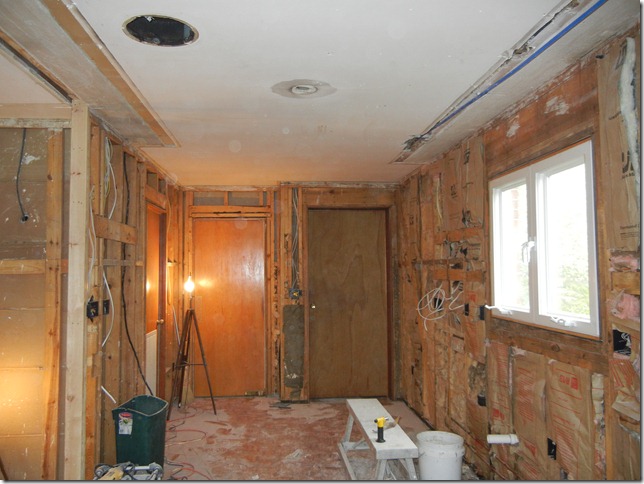 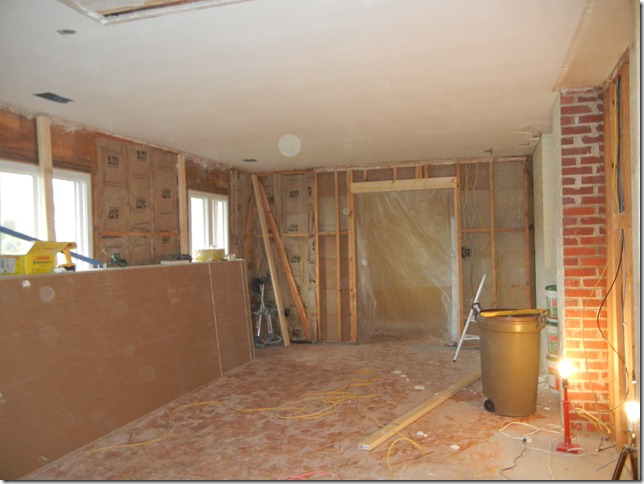 I know… dirtier, but not much else visibly different.  Well, don ‘t let the pictures fool you.  A lot of work did take place Thursday… just not any work that we had planned.

So here’s the deal.  The sheet rockers came Thursday morning as scheduled.  They prepped the room and began hanging the drywall.  The first board went up on the ceiling without a hitch.  So far so good.

They started to attach the second board of drywall to the ceiling… and BAM… a water leak (and I’m not talking about a nice little slow drip… I’m talking full blown water spewing everywhere)!  Craig quickly ran and got the water turned off (moral of this story… ALWAYS know where your water cut-offs are!!!) before we could assess the damage.

Apparently the waterline for one of our outdoor spigots runs directly above the old plaster ceiling in the kitchen.  And since it is such an old house there weren’t any stud guards in place to prevent anyone from screwing or nailing into the old copper pipe.  Oh the joys of renovating an old home!  I guess this is the first (hopefully not of many) unexpected items that will be added to the renovation checklist.

So they took the second sheet of drywall down and then they closely inspected the first sheet to make sure that there were no signs of a leak under that board.  There weren’t, so we just chalked it up to good old fashioned luck and moved on to the task at hand… repairing the leak that was under the second board.

Thankfully, Craig and the sheet rockers all knew a thing or two about plumbing.  They knocked out a hole in the ceiling to expose the pipe.  Then they cut the damaged section of the pipe out.  And here’s what they found… 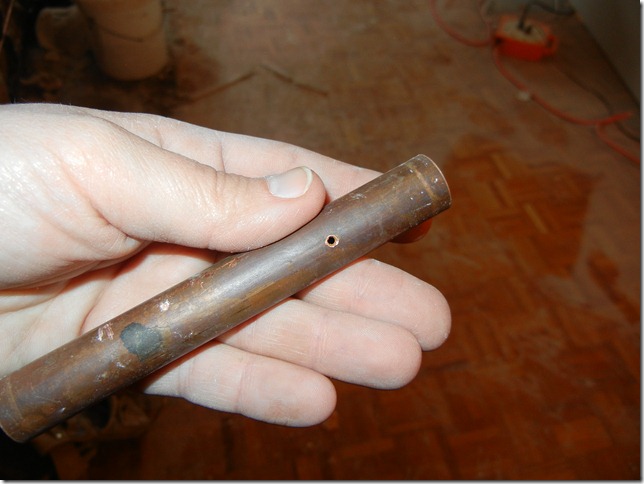 Hard to believe such a huge mess could come out of such a small hole!

They got to work cutting a new piece of pipe, attaching some copper fittings, and soldering it all back together… but for some reason the soldering didn’t take.  CRAP!  So they stuck another bread ball into the pipe (a new trick the sheet rockers taught us) and then they tried again.  At that point we noticed that a wet spot was beginning to form on the first board (which appeared to be dry upon initial inspection).  I guess we weren’t lucky after all.  So they took down the first sheet of drywall to expose yet another leak.  Craig cut out the plaster along the entire length of the pipe just to make sure that we had found all of the leaks.  Thankfully, it was just the two. 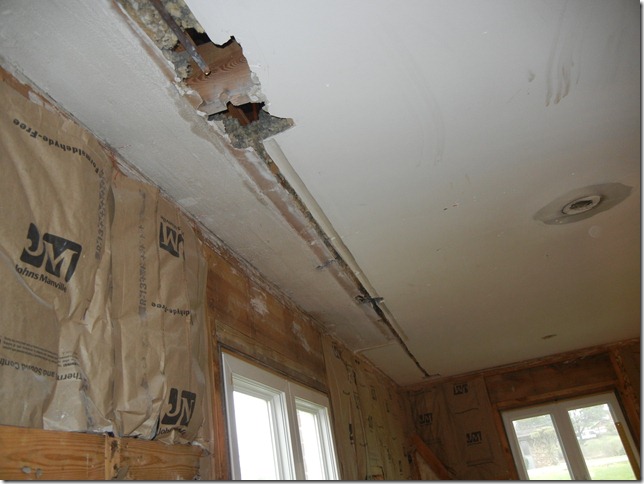 The decision was made to replace the entire 13 foot stretch of pipe in the attic with PEX piping instead of just replacing the leaks with another small section with copper.  So we removed the old pipe and the guys got to work attaching the fittings and installing the PEX.  Once installed we covered the new PEX piping with stud guards to (hopefully) prevent anyone else from screwing or nailing into the waterline. 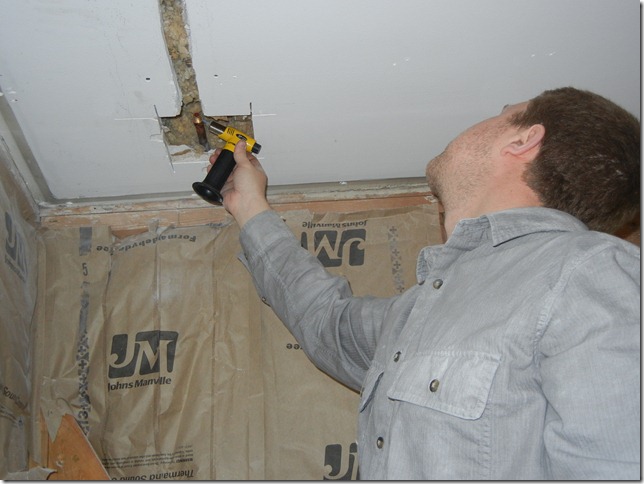 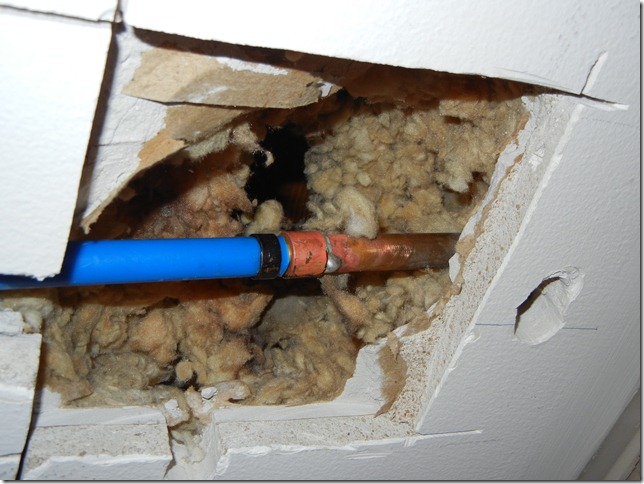 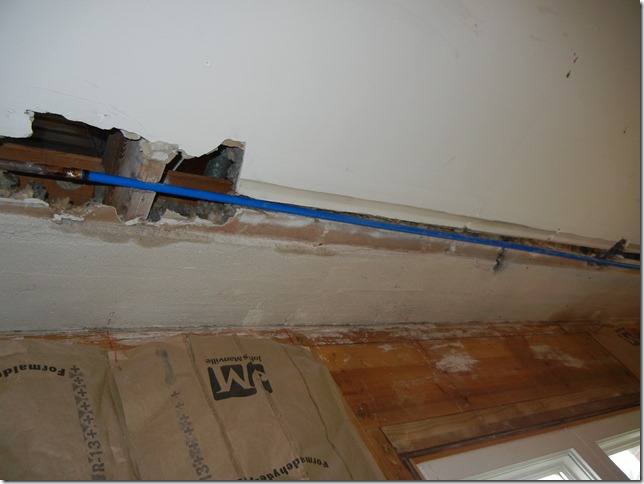 Our poor sheet rockers were so frustrated by the whole thing.  One said it had been 15 years since he’d hit a waterline and the other even longer.  So once the plumbing was fixed they went home defeated men having had to take down every piece of sheet rock (albeit just two) they had hung.

So, to make this long story short… we were able to fix the leaks without having to call a plumber.  HOORAY for that!  But we lost an entire day of work.  And that means that instead of having Bailey come home from the grandmas in Clover (South Carolina) on Sunday she likely won’t be back until Tuesday.  But on the bright side… I’m sure the grandmas are absolutely loving the extra time with her!