Another Bump in the Road

As far as I’m concerned we’ve been very lucky in our renovation thus far… especially since we’re tackling the majority of the work ourselves (thanks to losing our contractor last minute).  Until today the only real snafu was hitting a water line in the attic while hanging drywall.  As I hinted at during my last post, we hit another snag while trying to have our sink base cabinet installed.

Here’s the play by play.  Before installing the sink base the guys had to drill holes in the cabinet for the water supply lines and the drain line.  Sounds easy enough, right?  WRONG!

They drilled the first two holes without any trouble.  Then they started on hole #3 (shown below). 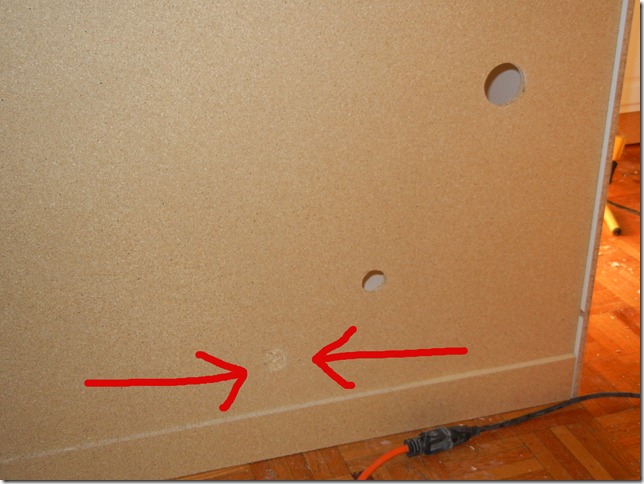 They quickly realized by watching the inside of the cabinet that this just wouldn’t work… the drill bit was coming through the bottom of the cabinet! 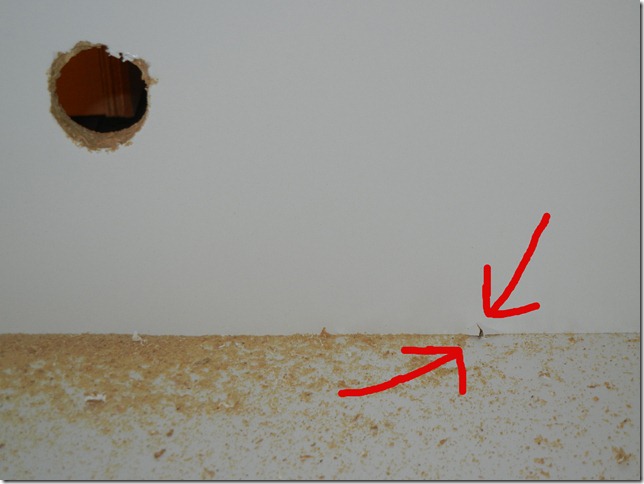 So what was the solution?  The installers left the sink base cabinet unattached for the evening to allow Craig time to move the water line (which he had already moved during renovation week one).  What a bummer!

But Craig was up to the challenge… he’s such a trooper!  Thankfully we already had the necessary plumbing supplies lying around the house, so Craig got right to work.

He turned off the water and then cut off the problem pipe. 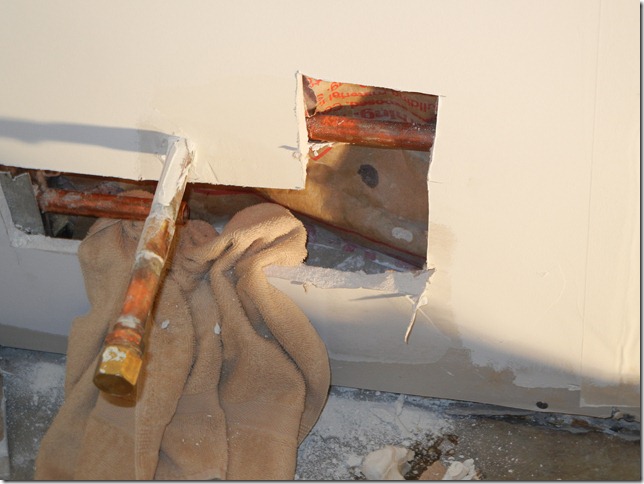 Then he soldered a few more angles in the pipe and put it back in place (only this time the end of the pipe was much higher). 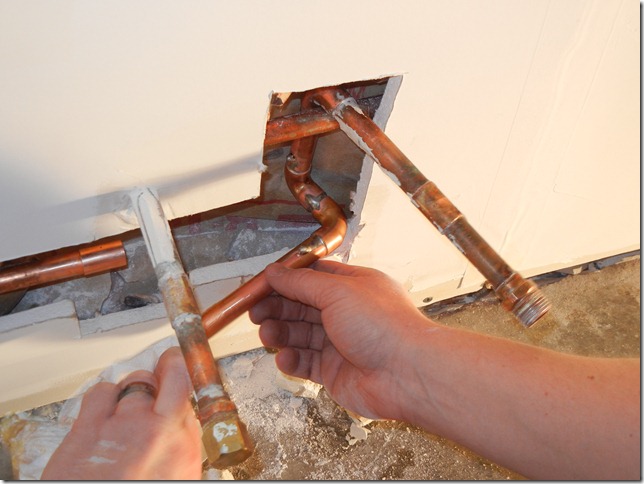 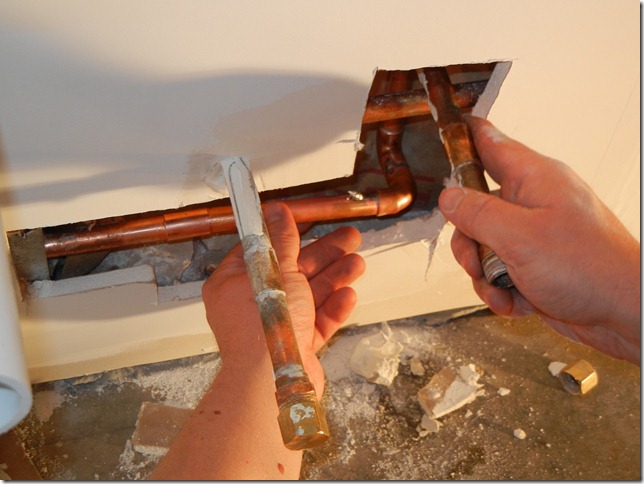 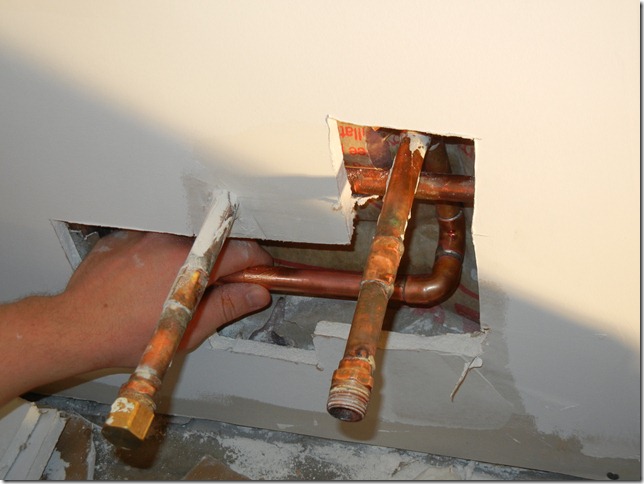 Next he soldered the connection to make sure everything was water tight. 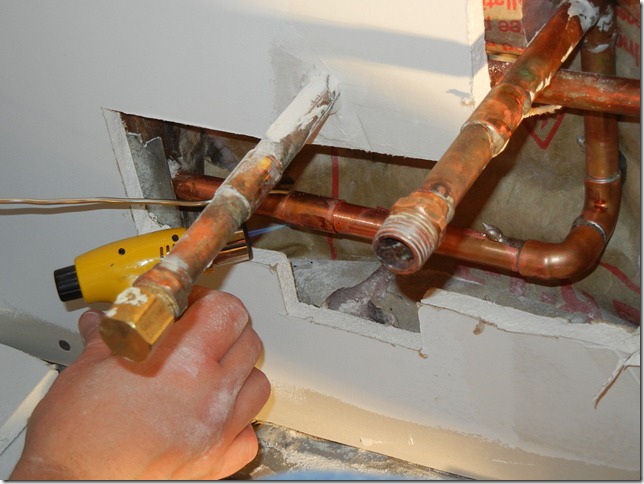 And “ta-dah”!  There you have it… a moved water line that shouldn’t cause problems with the new cabinet! 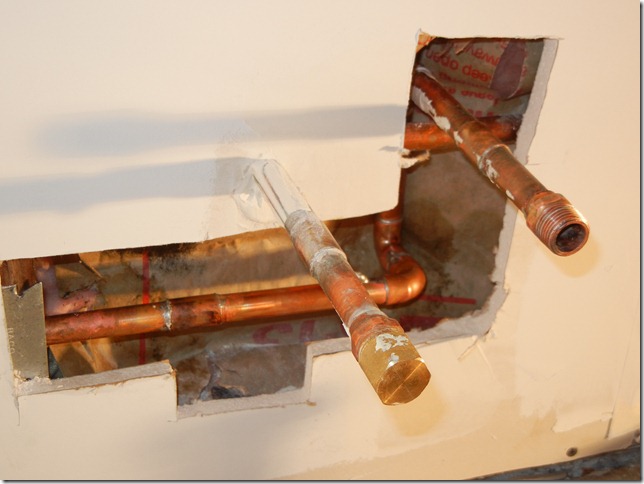 Craig’s final touch was to repair the drywall.  He screwed a couple 2 x 4’s in place, attached pieces of drywall to the boards, and then applied joint compound to cover the cracks (just like we did in the laundry room). 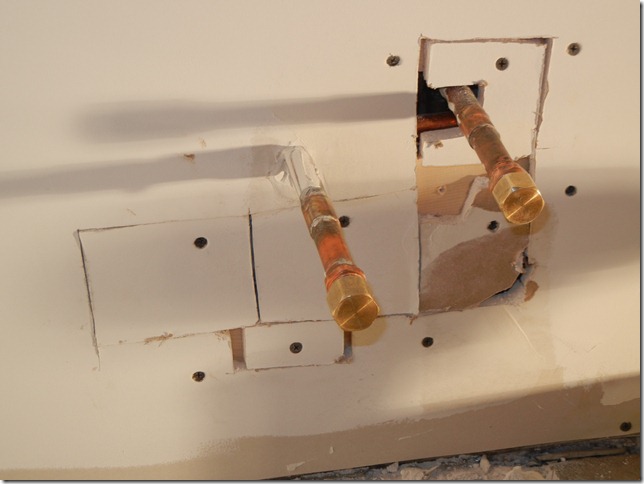 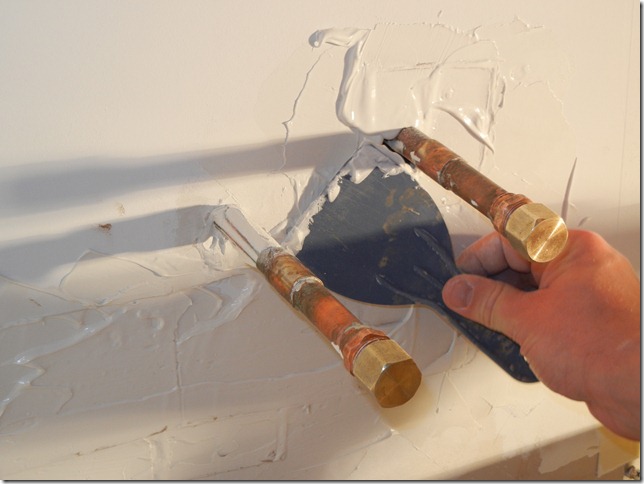 We’ll let it dry over night and give it a quick sanding in the morning before the cabinet installers come back to finish the job.

And there you have it!  Another impromptu plumbing repair done without having to call in a professional!  I’ll take that any day!  And I’ve just got to give a big shout out to Craig for another job well done!  I tell ya… I really lucked out when I found him!  He’s turned out to be quite the handy honey-doer!