I am so pleased to be writing this post!  I can now officially say that we have a fully functioning kitchen again!  That’s right folks… our new wall oven/microwave combo has finally been installed!

I know… your thinking to yourself “have you really lived without an oven since demo-ing the old kitchen nearly 7 months ago?”  Well, the answer is yes.  And surprisingly enough, it was pretty easy to do once the cooktop was installed.  And to supplement the cooktop we did a fair amount of grilling, crockpot-ing, toaster oven-ing, and microwaving (with our old countertop microwave).

But anyway… back to my point… the oven is in!  And it’s a beautiful thing!

However, before I show you the completed picture I’m going to show you all the work that went into installing it.

The first thing that we had to do was make some adjustments to the cabinet that would be housing the oven.  Craig removed the pullout shelf and the cabinet doors below the oven cut-out and built a frame inside the cabinet to support the weight of the new oven. 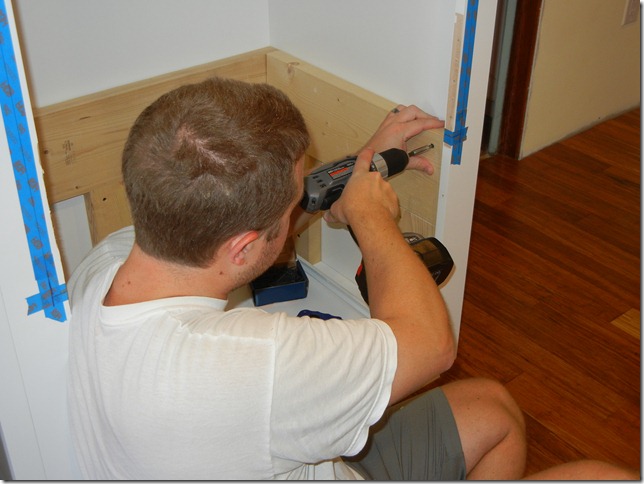 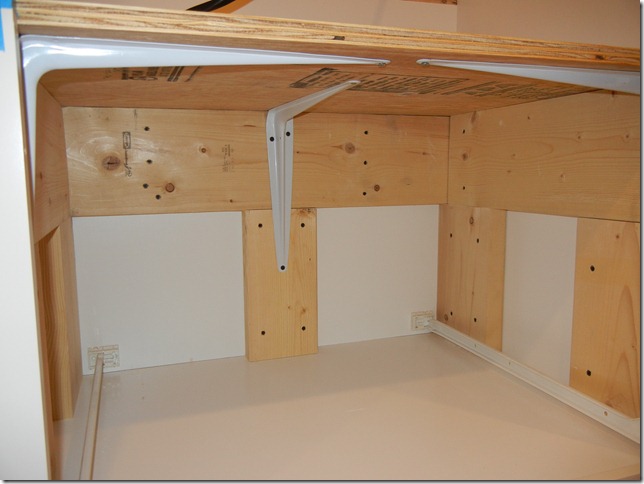 Then came the hard job of making the oven cut-out larger.  As you can see from the pictures in this post the oven cabinet already came with a cut-out for the oven.  Unfortunately, the cut-out wasn’t quite big enough to accommodate the oven/microwave combo we purchased (which we knew when we bought the cabinets… so we were fully prepared to cut it out some more).  So Craig got to measuring twice 300 times and cutting once.

He used blue painter’s tape to mark his cuts.  This also helped to prevent the cabinet wood from splintering when it was cut. 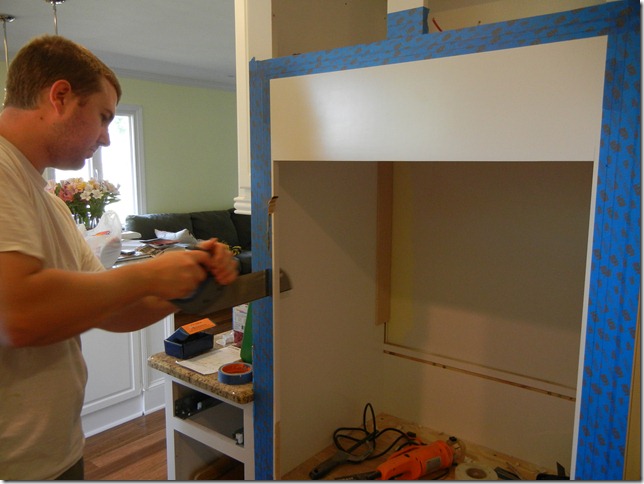 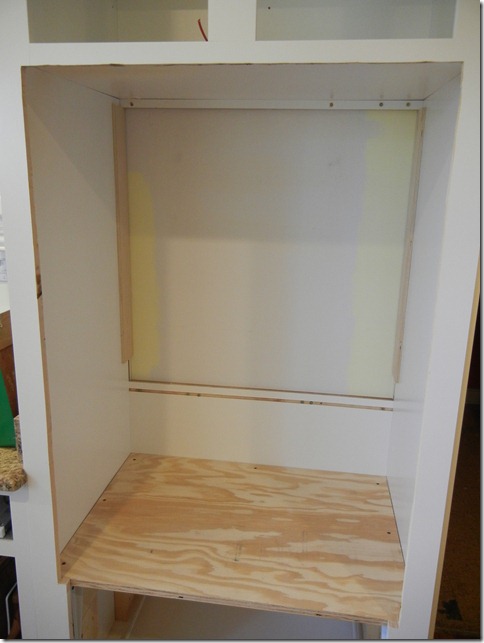 Then Craig cut a hole in the drywall behind the cabinet to fish the wiring to the oven through.  This wasn’t too difficult since we knew exactly where the wire was.  We knew we were going to have to do fish the wire through so we intentionally left plenty of wire in the wall when we rewired the kitchen and we made sure to mark the wall with pencil once the drywall was installed.

So Craig cut a hole from one stud to the other, pulled the wire out, and then fished it up and through a hole he had drilled in the top of the cabinet.  He then attached the wire to an electrical box. 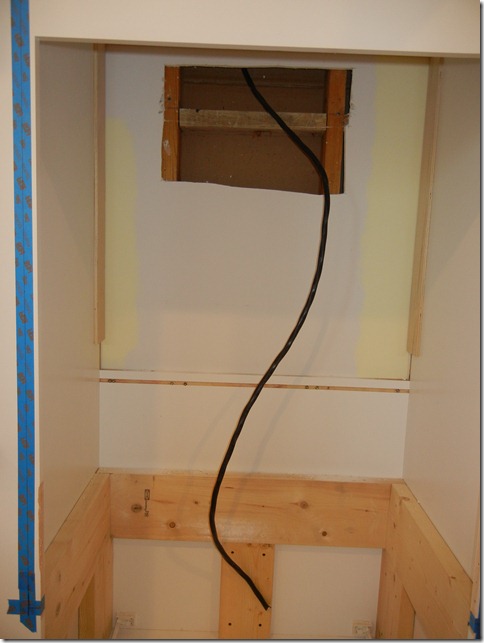 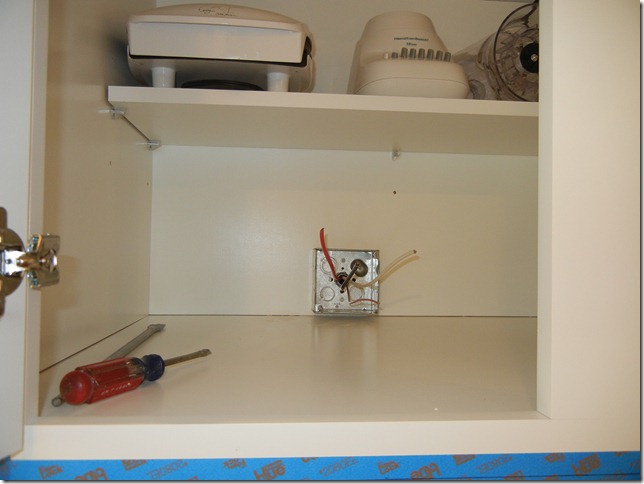 Then he drilled another hole in the corner of the upper cabinet, through which we would later run the wire from the oven and then connect everything in the box. 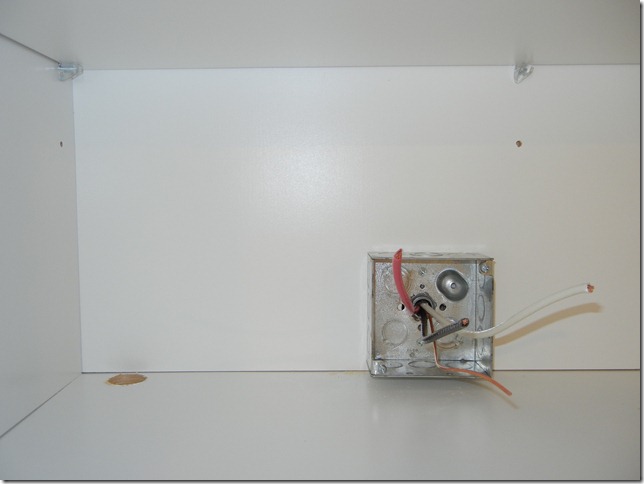 Next he took the piece of drywall he cut out, screwed it back in place, and then mudded the seams.  He didn’t bother with priming and painting it since it would be concealed behind the oven. 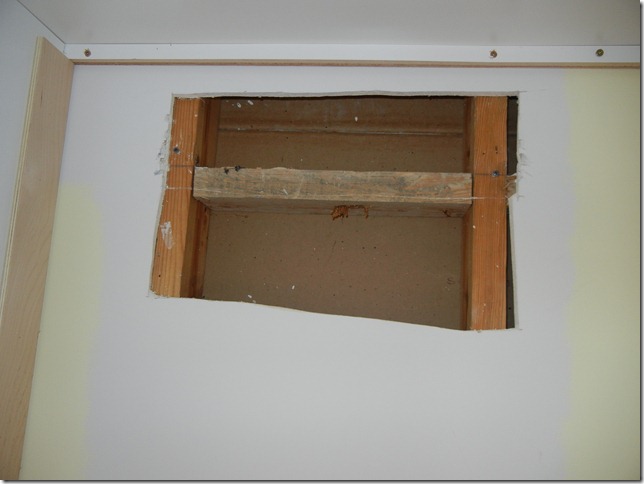 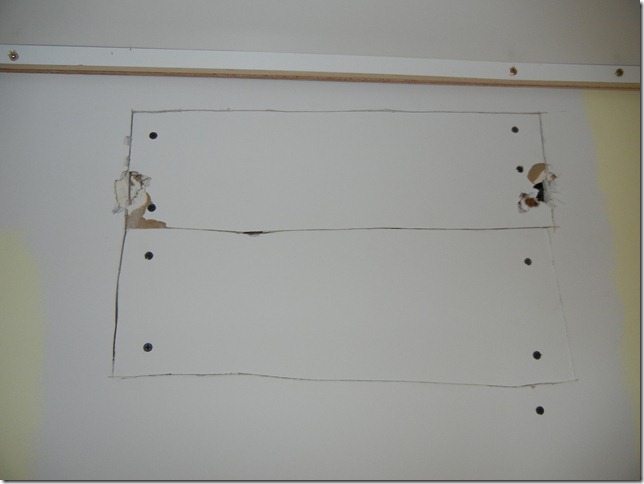 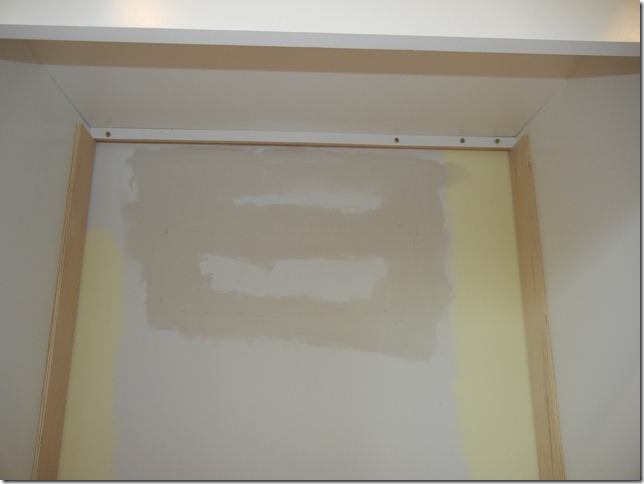 Once all of this “prep” work was done we were ready for the physically intensive part of the job… moving the couple hundred pound oven (even with the doors removed) into place.

Thankfully, Craig had a plan for doing this that didn’t involve us actually lifting or carrying it.  The basic idea was to wheel the oven into the kitchen on a dolly, lower it onto three 2 x 6 boards, and then strap it in place. 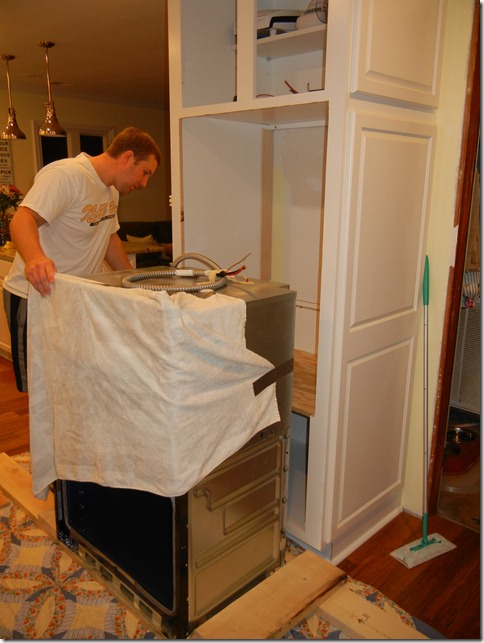 Next Craig lifted the boards on one side (tilting the oven up) while I slid a frame made of 2 x 4’s underneath the platform of 2 x 6’s. Then we would move over to the other side and repeat the process, which resulted in lifting the oven 4 inches off of the ground with each pair of 2 x 4 frames.  I swear I felt like an Egyptian trying to build the pyramids using logs and rope pulleys… it was absolutely crazy!  But it worked! 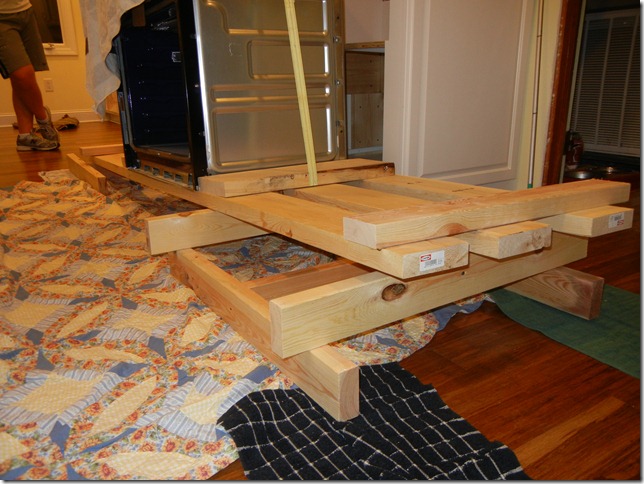 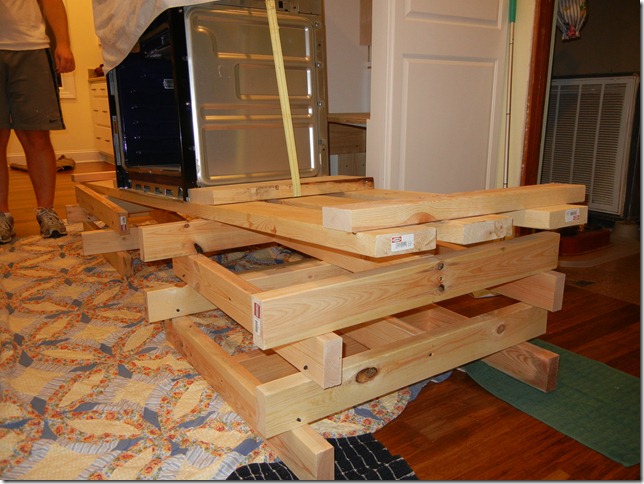 Five pairs of 2 x 4 frames later the oven was lifted to the height of the cabinet cut-out. 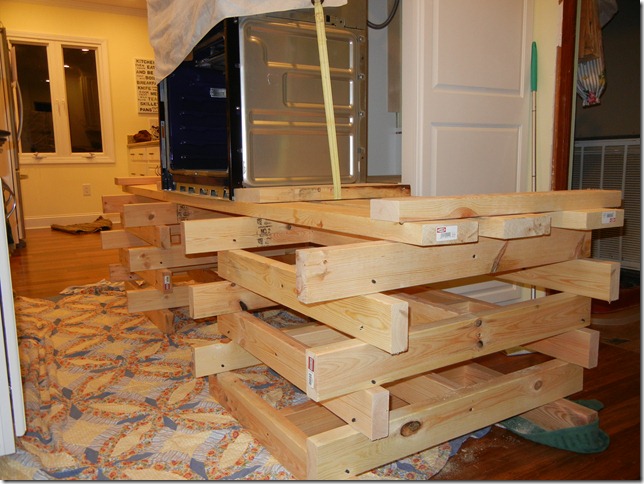 Then all we had to do was run the wire from the oven through the hole in the upper cabinet and slide the oven back into place. 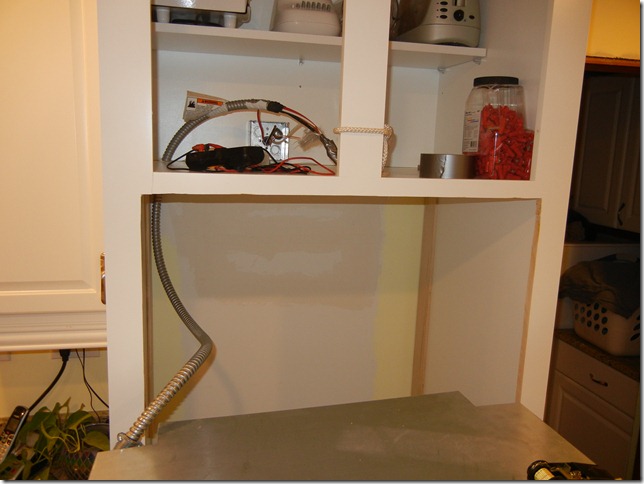 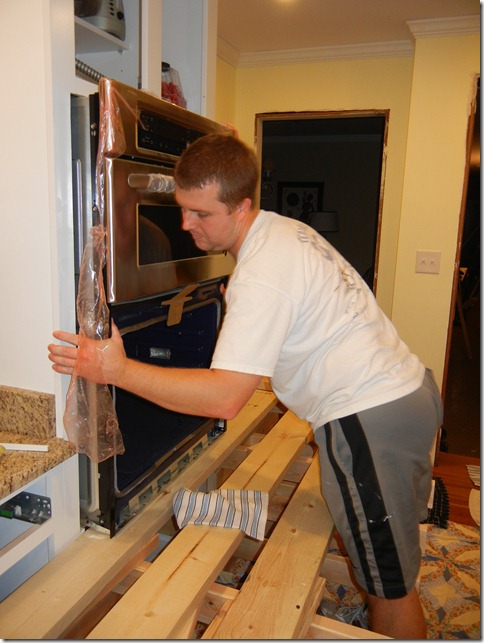 Next Craig connected the wires in the electrical box and switched on the power. 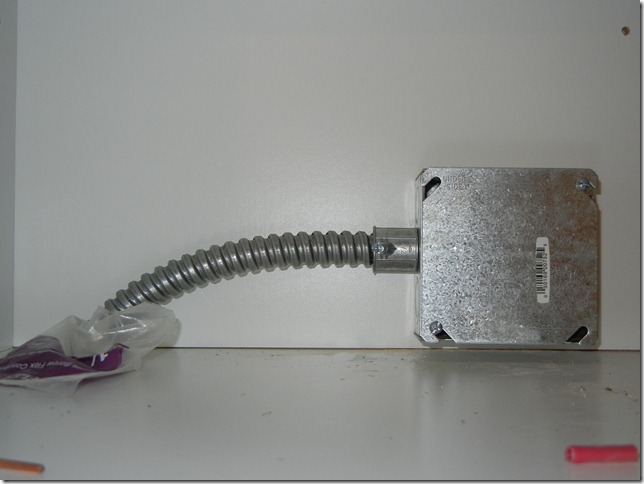 The last step was reattaching the oven and cabinet doors, which left us with this final product.  Not bad, huh?  Especially when compared to our old, pre kitchen renovation oven! 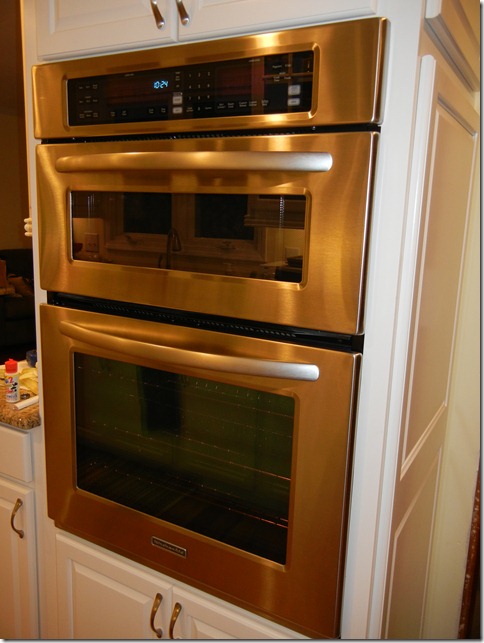 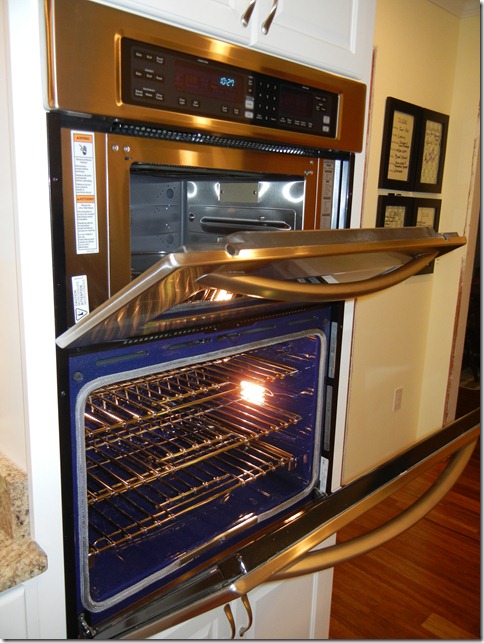 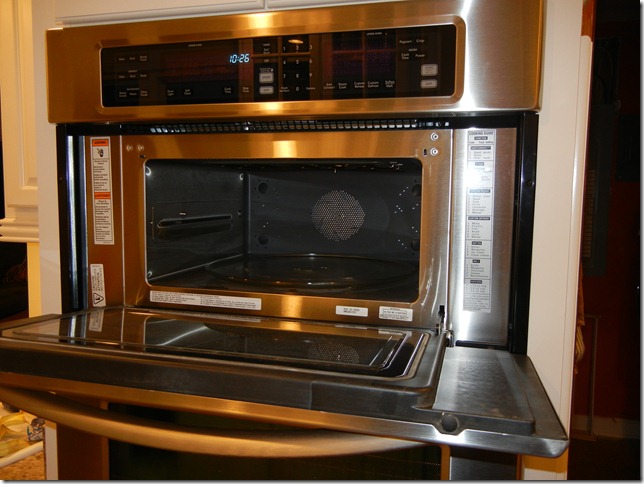 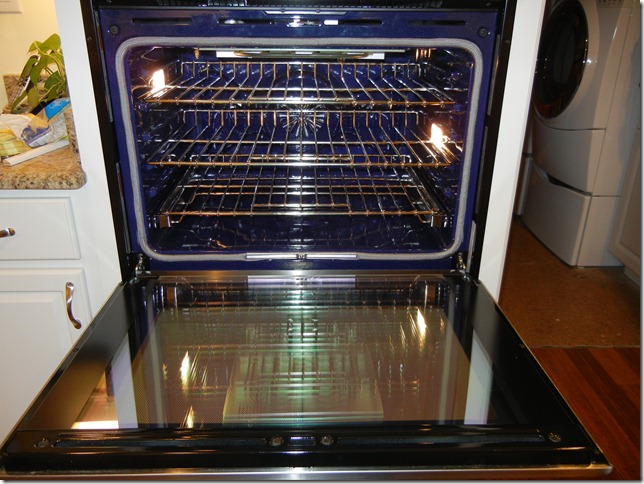 What a huge improvement!  I am so excited to finally have an oven again!  I may just have to bake myself a birthday cake to celebrate!

Oh… and let’s not forget to give Craig a huge virtual pat on the back!  What an awesome job he did (as usual)!  I am so lucky to have snagged such a handy hubby!
Posted by Alanna at 10:39 PM