I found this pair of frames at the Salvation Army for $2.97. 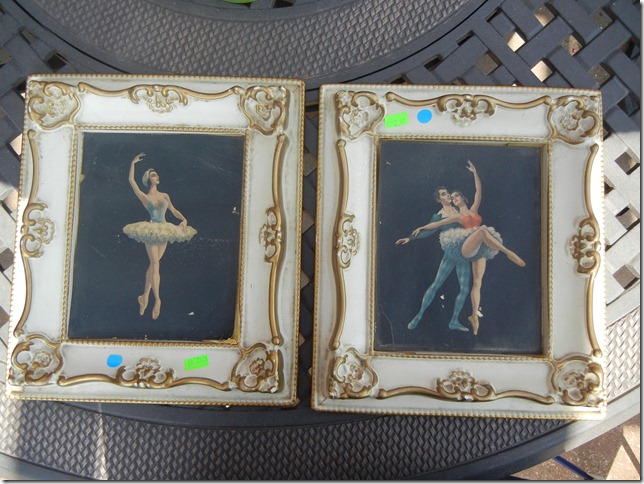 On the same trip I found this circular frame for just $0.97.  Another great price! 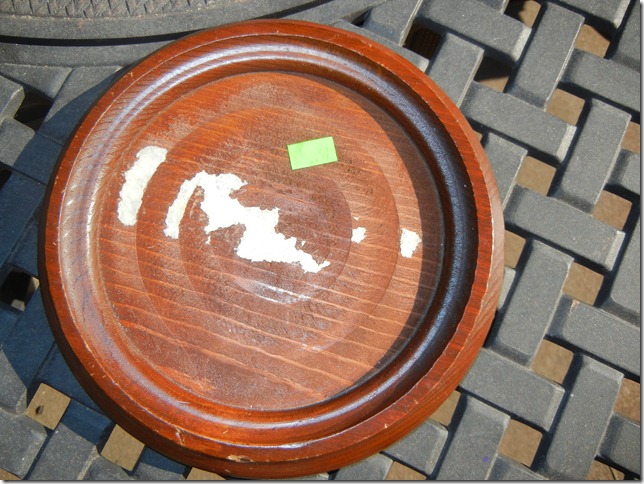 And for less than $4.50 (when you include tax) all three frames went home with me! I wasn’t quite sure what I would do with them, but I knew I’d come up with something.

Once I got them home I removed the old ballerina pictures which had been stuck on with double-sided tape.  Unfortunately, the tape was so old that it left a pretty nasty residue behind.  Definitely a bit of a bummer, but I knew I could work around it. 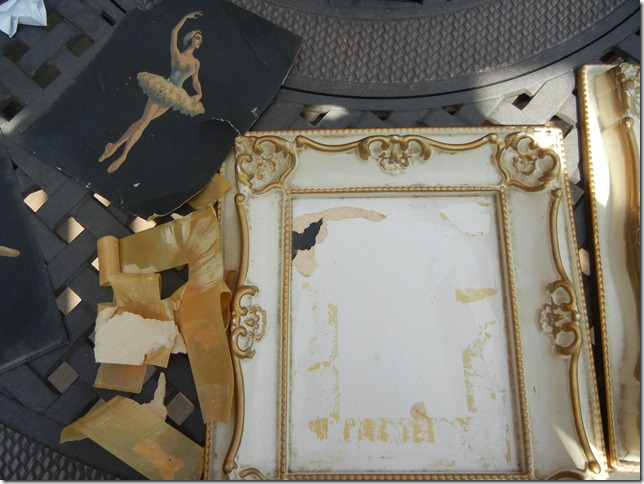 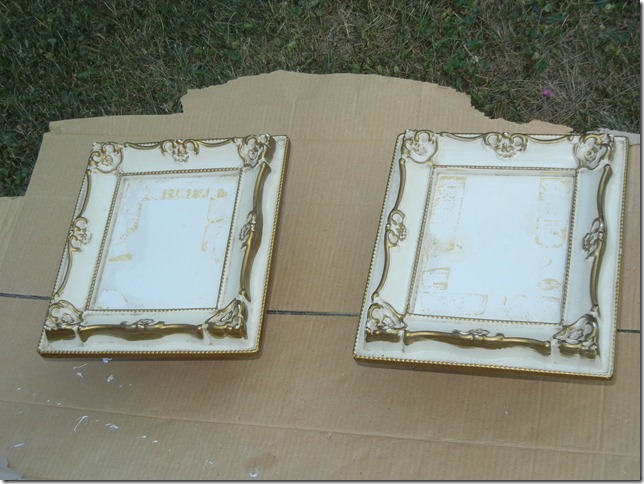 I laid all three of the frames out and gave them two even coats of black spray paint. 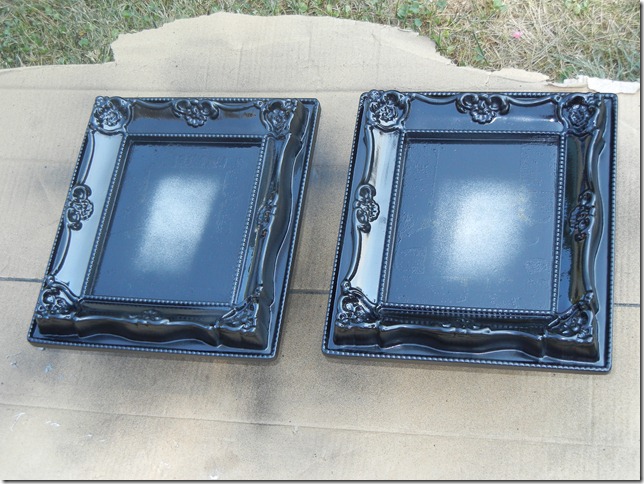 I bought three pieces of scrap photo mat and had them cut at a local craft store.  I figured that I could use them as backings to cover up the rough texture left behind by the double-sided tape.  The store charged $0.25 (plus tax) for each piece of mat, so for about $0.82 I had three backings.  A price that’s definitely hard to beat!

The store was able to cut two rectangles perfectly to size for the former ballerina frames.  But when it came to the circular frame I had to improvise.  I asked the employee to cut a square with the same measurements as the diameter of the circular frame. 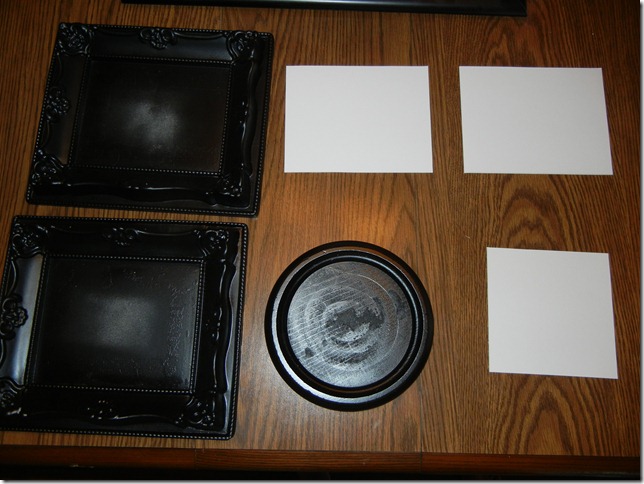 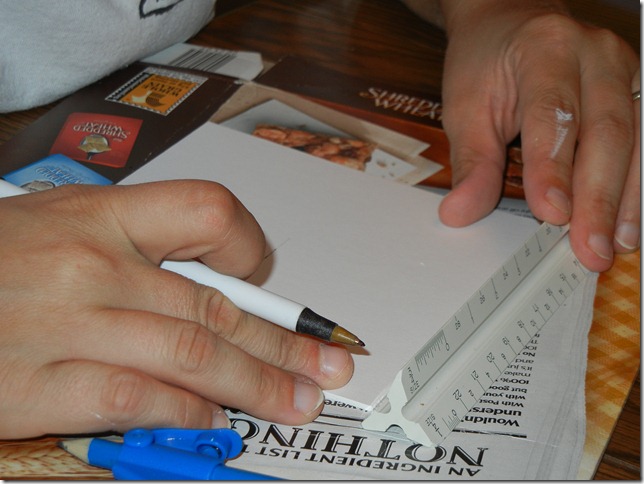 Using a compass I drew a circle, making sure the needle of the compass was on the mark I had made for the middle of the square.  Then I used a craft knife to cut out the photo mat circle (making sure to have a piece of cardboard beneath it to prevent the table from being scratched). 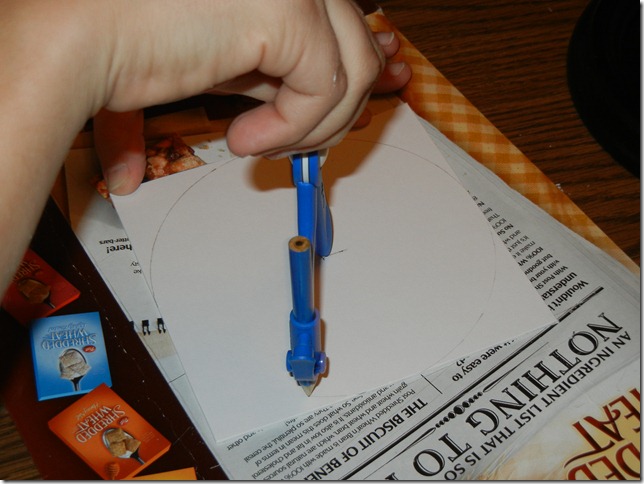 My next step was to cut a circle and two rectangles out of craft paper that would match the size of my photo mat boards.  I used the mat boards as templates and just traced around the outside of each one to get the right shape.  Once traced I cut the craft paper shapes out with scissors. 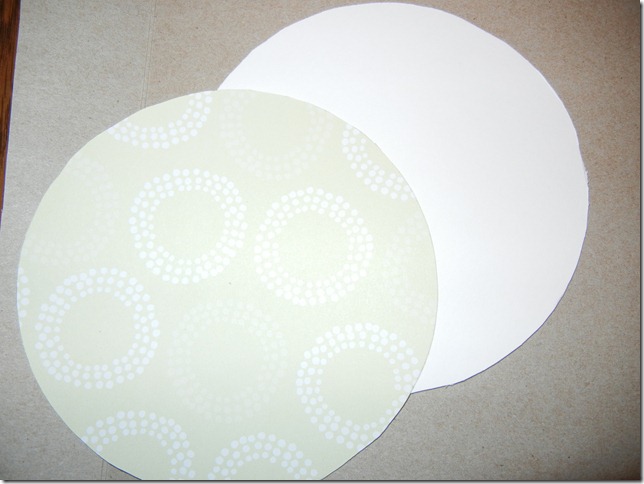 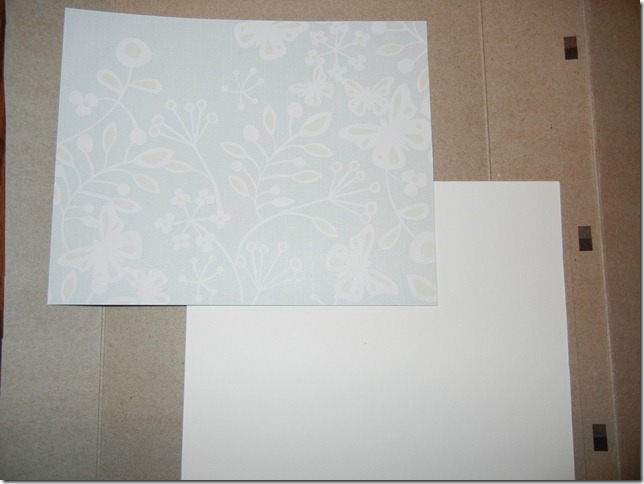 Next I decoupaged the craft paper to the photo mat boards with Mod Podge and let them set up to dry for a couple of hours. 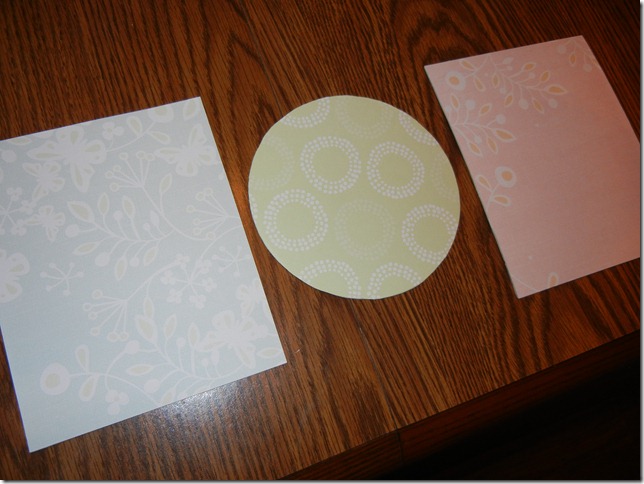 In the mean time I used Microsoft Word to create a template for the words that I wanted to paint onto the craft paper. 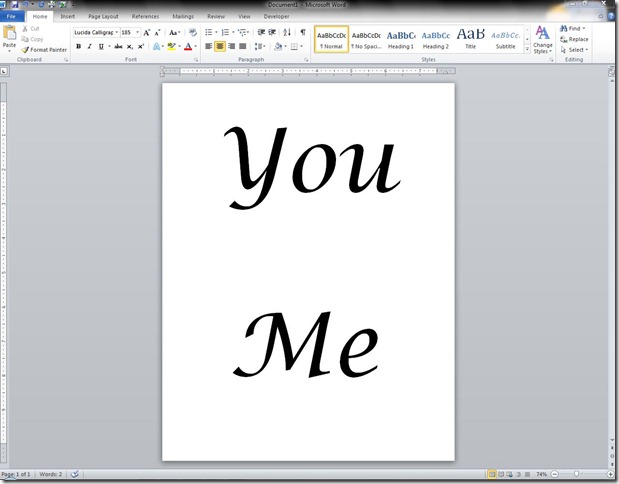 I printed the words and cut them out using a craft knife (again, with cardboard beneath it).  I made sure to save the interior pieces that I cut out from the “o” and other letters so I could use them in my stencil. 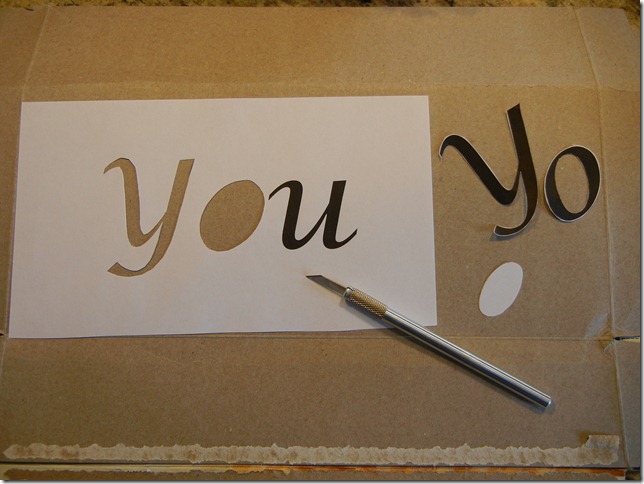 Then I centered the templates over the craft paper and taped them in place using a couple of small loops of scotch tape. 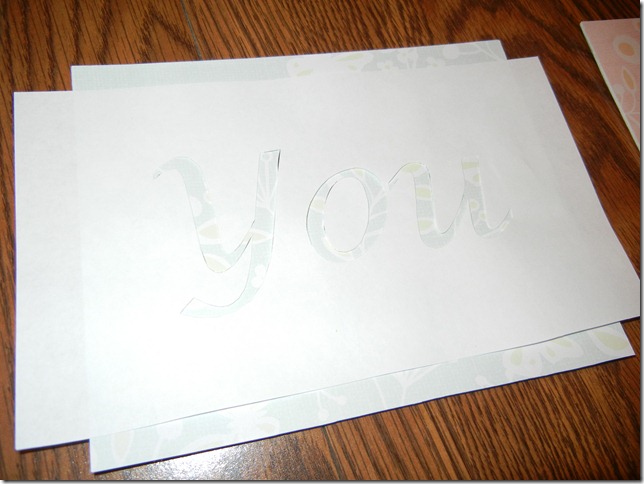 After lightly applying some black paint with a sponge brush I let things dry and then peeled off the stencil. 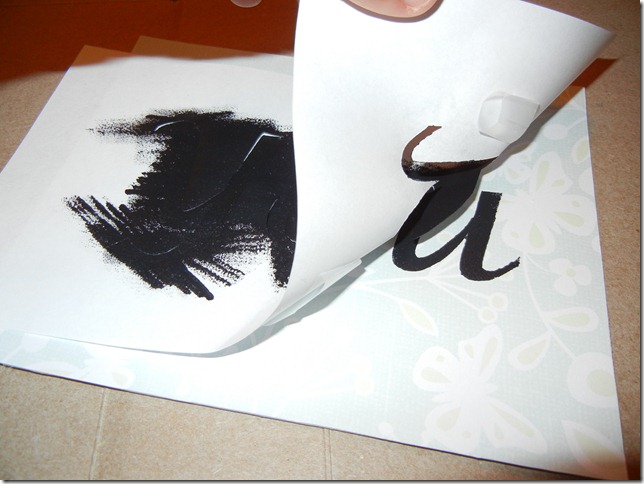 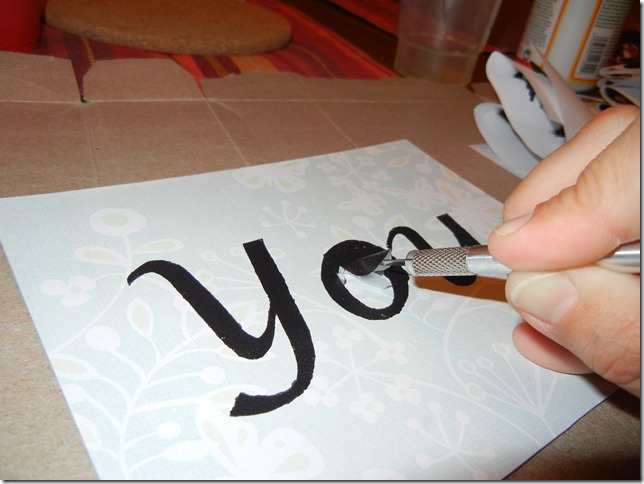 Unfortunately, there were a couple of spots where the paint bled a little. But I figured nobody would even notice it once the frames were hung on the wall.

Next I applied glue to the freshly painted picture frames and pressed the photo mat boards into place. 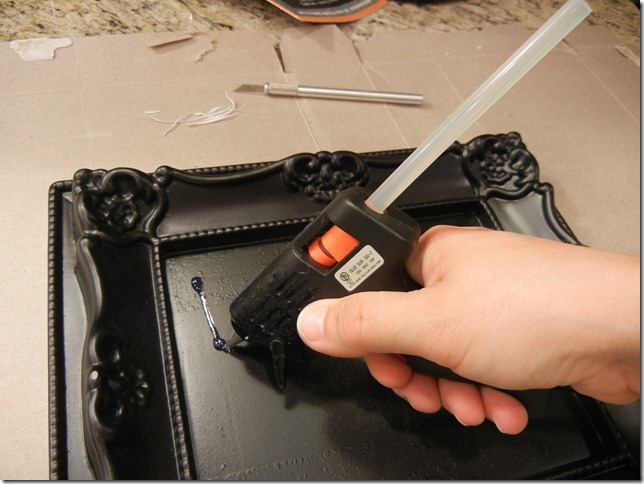 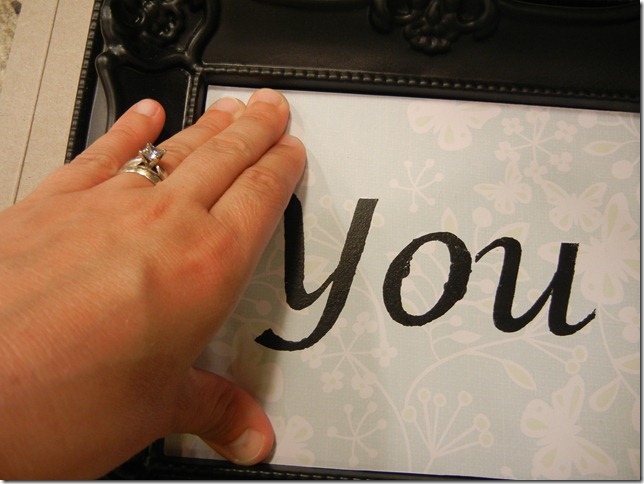 And the end result was the phrase “You & Me” which I hung in the corner of our bedroom. 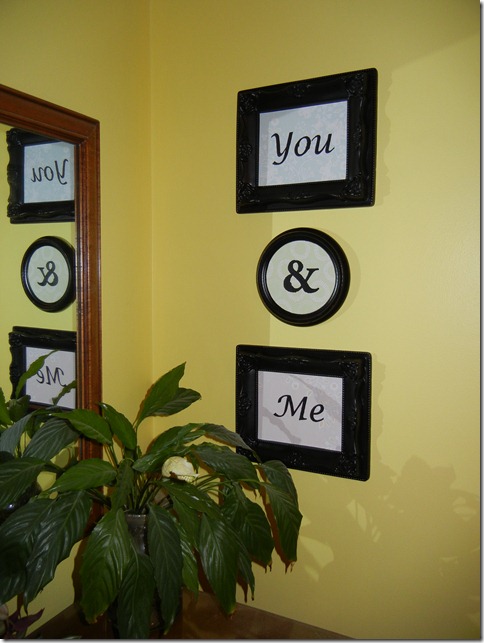 What a sweet little reminder to wake up to each morning!

Really cute! I love words on a wall!

Beautiful! Simple and elegant! I wish I had 1/10 of your creativity and luck finding cool things.