That’s right… my little baby has moved out of the infant room at her day school and is now officially a member of the toddler room.  *sniff, sniff, sniff*

I know what you’re thinking…

“Bailey was still in the infant room?  She has easily been considered a toddler for months now!”

BUT due to the fact that there weren’t any new babies coming in behind her she had been allowed to stay in the infant room.  Which means that she had had the same teacher (Ms. April) at day school since I first dropped her off at 6 weeks old… over a-year-and-a-half ago. *sniff, sniff, sniff* 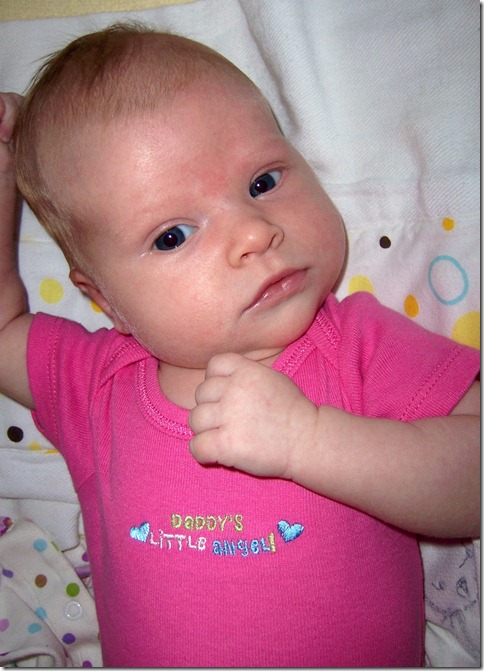 And April has been a wonderful teacher!  She has seen the good, the bad, and the ugly with Bailey… and she loves my rotten child anyway!  What more could a parent ask for in a teacher!  Thanks for getting my baby off to a good start April!  We love ya’!

Now it’s Ms. Kim’s turn!  And we’re excited to be starting a new year filled with new friends and new things!  Like going out to play on the playground every day, napping on a mat on the floor, and eating in a little chair at a little table with her class mates.

I have to admit… I was a little quite nervous about how Bailey would handle the transition.  The thing I was most worried about was the nap time situation.  I fully expected her not to stay put given the new mat-on-the-floor arrangement… especially after the failed attempt to transition her to a toddler bed at home.  But I’m pleased to report that so far she’s handled it very well.  In fact, she seems to be napping better on the mat (for close to 3 hours each day) than she has ever napped before!  I guess she really was ready for a change… which sadly means she’s most definitely not a baby anymore.  *sniff, sniff, sniff*