Pedestals for a Steal!

Craig and I debated over and over whether we wanted to stack our new washer and dryer or install them side-by-side.  At the time we ordered our new appliances we had plans to stack them (so we’d have more space in the tiny laundry room), so we didn’t bother looking into buying pedestals through the special deal that Whirlpool was offering us.  Once the December 31st deadline for the Whirlpool deal lapsed we decided that we did in fact want to install the washer and dryer side-by-side (since we had plans to eventually move the HVAC unit into the attic and space wouldn’t be an issue).

Once this decision was made we then had to make the decision of whether or not we wanted to sit the machines on the floor (which would mean that we would have to bend over to load or unload any clothes) or if we wanted to spring for the pedestals (MSRP $270 EACH).  There were pros and cons for each option, but Craig felt very strongly that it would just be too much of a pain (perhaps literally) to bend over to do the laundry.  So I gave in and agreed to consider the idea.

We began searching for a deal… because I refuse to pay $540 + tax (which happens to be 9.5% in the state of Tennessee) for something that I see more as a want than a need.  Unfortunately, when we first began looking the lowest price we found in our local stores or online was $249 per pedestal... a little better than paying $269 each, but still not great.

Then one day, while searching the Lowe’s website for some kitchen reno-related items, Craig happened upon this… 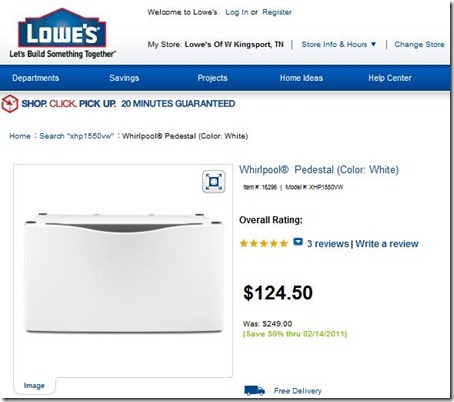 The pedestals were listed online for half of what we could buy them for anywhere else.  Although a great find I still wasn’t 100% convinced.  But I agreed to go to Lowe’s with Craig and look at them so that he could try to convince me.

When we got to Lowe’s the price on the shelf was $249.  We talked with the sales clerk and told him about the online price of $124.50.  He seemed shocked at the thought that they would be priced so low, but checked it out online… and low and behold he saw we were right!  He told us that he would manually correct the price, put the order in on the computer, and have the pedestals waiting for us up front when we finished our shopping.  So I gave in and agreed to buy two pedestals.

We went to check out and the cashier looked up the sale in the computer.  He told us that the total for the 2 pedestals was $124.50.  Our jaws about hit the floor!  I asked the cashier if the total was correct and made him double check that it included both pedestals (I didn’t want to get accused of stealing or get the cashier in any trouble)…  he said that it did and even asked another cashier just to make sure.  I was still confused by the price, but decided to roll with it and see what would happen.

Then I gave the cashier a 10% off Lowe’s coupon that I had picked up from the Post Office (In case you didn’t know… you can request a “moving packet” from the counter at any Post Office and they’ll give you a free packet of moving-related coupons… one of which is a 10% off Lowe’s coupon) that I had been hanging on to for our next big Lowe’s purchase.  This brought the final sales price for 2 pedestals to $123!  Let me put that in perspective… the final sales price for 2 was less than half the cost of 1!!!

To top it all off we had Lowe’s gift cards (that we had gotten from cashing in our old Discover Rewards points) to pay for the whole transaction!!!  So not a single penny came out of our pockets to pay for any of it… AND we still had plenty of gift card money left over to put towards our cabinet purchase!

Definitely a steal… and we have the receipt to prove it!!!

So, the morals of the story are…

2.  Remember to pick up some moving packets if you’re planning any major (or even not so major) purchases at Lowe’s!  10% savings can add up quick!  Plus, they’re completely free and you can ask for as many as you want!

How funny that Craig wanted it and you didn't! It would certainly be the opposite in our house!

Haha, I thought the same thing about our household here, too, Holly!

Good thing I had already bought some pedestals before I had Jake. haha You'll love them, Alanna!

i know... i'm weird like that... but i must admit that i'm kinda liking the fact that we have them :)