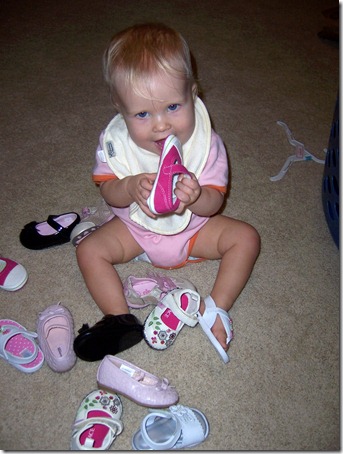 Bailey is still crawling all over the place.  She’s gotten super strong!  She’s pulling up and climbing on everything… furniture, toys, people, Sydney… doesn’t matter what or who it is… she will conquer the mountain!

Bailey is growing like a weed… on fertilizer!  It seems like almost every week I’m having to sort through shoes or clothing because they’re too tight, too short, or she just can’t squeeze herself into them anymore.  I must admit it makes me pretty sad to think about how quickly she’s growing up, but at the same time very excited to see the super cool kid she’s going to become!

Bailey is in to everything.  She’s figured out how to get into the desk cabinets where the computer is housed and has even managed to remove one of the “childproof” electric outlet covers… which means either the outlet covers are cheap, despite what we paid for them… or we have a genius baby on our hands!  My guess is that she’s just a little geekling like her daddy was!

Bailey now has 6 teeth… 4 on the bottom and 2 on the top.  She’s trying more table foods and discovering that she actually likes them!  But after eating pureed peas, ham, pasta, etc. for almost 6 months, who wouldn’t be ready for a grilled cheese sandwich!  We’re weaning her bottles down and still trying to perfect the sippy cup.  Every time I think she’s gotten the hang of the sippy cups, it seems like we go back to square one.

Bailey has really progressed with her sleep in the last month.  She has gotten so much better at putting herself back to sleep when she wakes in the night because of gas, a noise, teething, or whatever else causes her to stir!  Although… please don’t get me wrong,… she can still be a little unpredictable at times.  But I figure I can’t complain… it’s a lot better than it was a couple of months ago!

Can’t wait to see what Month 11 has in store for us!

She is so sweet! I can't wait to see her!
(P.S. I hate she's still struggling with the sippy cup . . . HOWEVER, it sure does make us feel a little better seeing as how horribly Ross is taking it!!)

She looks bigger in this picture than she was when we saw her a few weeks ago. Just adorable though! I like the "geekling" comment too! :-)