Okay... so I realize that this post is more than 2 weeks overdue, but we've been pretty darned busy lately! We've gone on 2 big trips (each a 10-12 hour car ride)... thankfully Bailey was terrific on them both!

Anyway, Bailey is now 7 1/2 months old! She's had another big month full of new things! She's started saying "bye-bye" and "Da Da"... Craig was quite pleased to say the least! She's now crawling... at least in reverse that is. The little monkey hasn't quite figured out how to go forward... it's so funny to watch! Bailey tries to go forward. Bless her heart she really does try... but she just never quite makes it. Another first is that she can now toddle around the house in the walker that Maelen so kindly let her borrow... however, 90% of the time she's going in reverse in the walker too. What a goober! Bailey now has 3 (and 1/4) teeth on the bottom... still none on the top. She's still a really good eater! She's started feeding herself some beginner finger foods. Sure half of them end up on the floor where Sydney is eagerly waiting, but her aim is gradually improving! We're still working on perfecting the sippy cup. Her schedule has changed a lot in the last month. She's now taking one less nap than she used to and spends a lot more time playing... sometimes she plays so hard that she completely wears herself out. Some of you know that once she started teething around 4 months she began having a lot of trouble sleeping through the night. Well, in the last week she's started sleeping the whole night through again! I can't tell you how happy this makes craig and I!!! Hopefully she won't change it up on us too soon.

Here are a few pictures from over the last few weeks... enjoy! 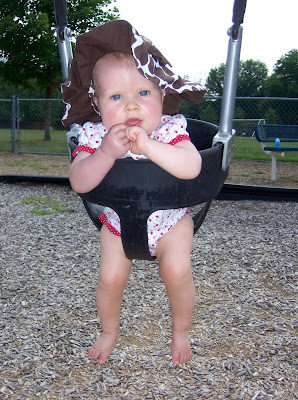 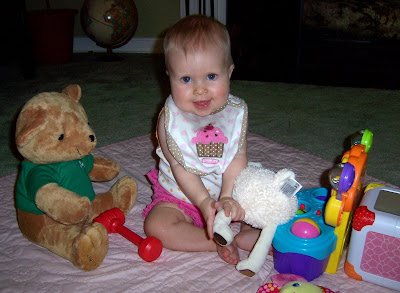 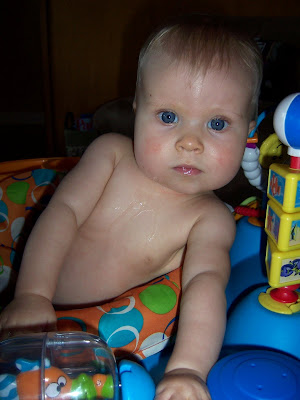 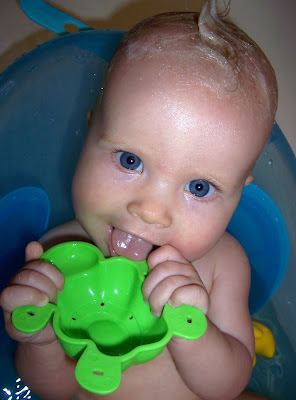 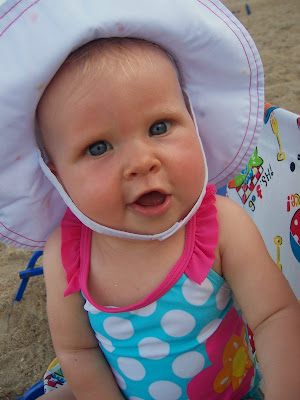 She is sooooo adorable oh my gosh! I want to hold her again! :)

How exciting! I love to read these posts to see what's to come with Ross! (Although, I'm quite nervous about this teething thing!)

P.S. Are you still swaddling her?

holly--we're not swaddling her anymore. we stopped that when she was about 5 1/2 months old (we waited a lot longer than most people do). at first we had a hard time breaking her of it. we finally tried putting her on her stomach which really seems to have helped... she doesn't move her arms and legs as much and she really does sleep better. i know it's a BIG no-no, but it worked for her.

the teething really wasn't that bad with us. she wasn't nearly as fussy as some other babies we knew. she started waking some during the night, but it was always easy to get her back to sleep. the hardest part was that on top of the teething pains she was having there was the big tylenol recall and we started trying to break her of the swaddle. it was just bad timing for that to all happen at the same time.

no matter what happens you just have to remember that it will pass :)