Saturday Craig took me to Asheville for a early anniversary weekend full of surprises! I knew that we were going, but I had no idea what we were doing or where we were staying. Bailey stayed at home with my mother-in-law, Bev, so that we could get away just the two of us!

The first stop Saturday morning was at the North Carolina Arboretum. Craig had read that this was one of the nicest botanical gardens in the southeast. We enjoyed the scenery as we explored the gardens. 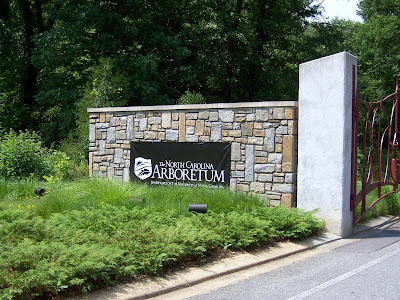 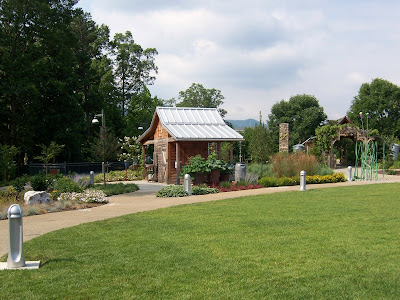 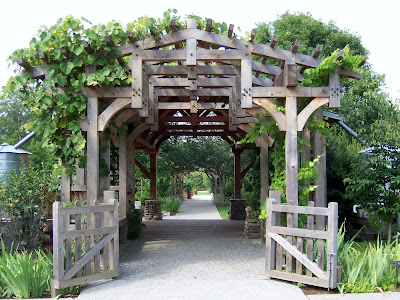 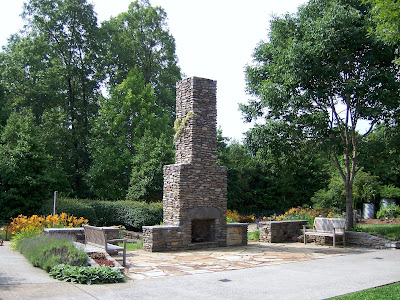 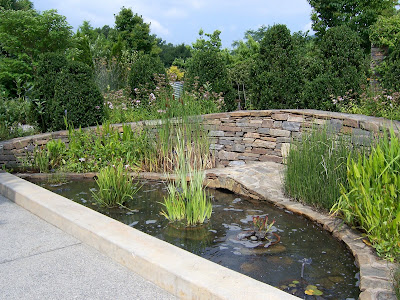 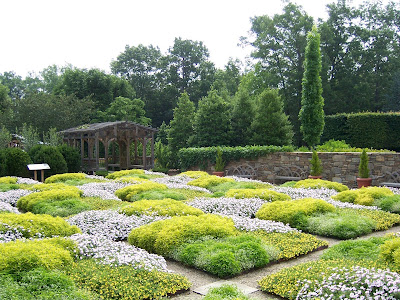 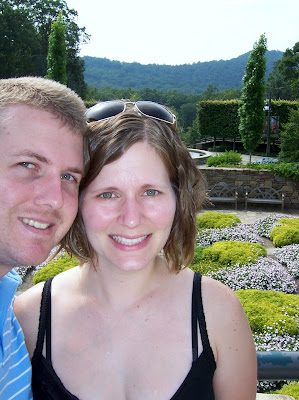 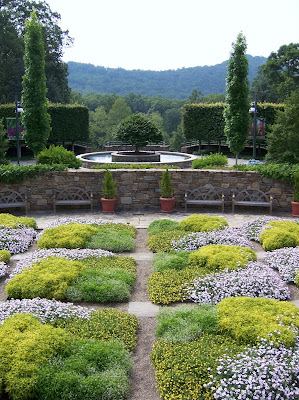 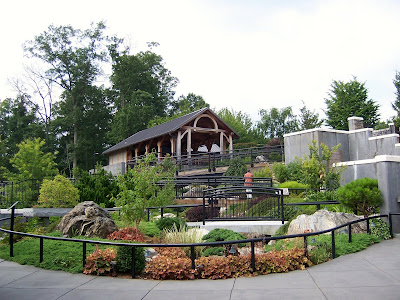 After leaving the Arboretum we went to the Biltmore Village for lunch at Rezaz for some yummy Mediterranean food! We spent some time walking around the village after lunch. Our next stop was in Asheville's River Arts District where we walked through the various studios/galleries and then ended our tour with a couple of pints at the Wedge Brewing Company. 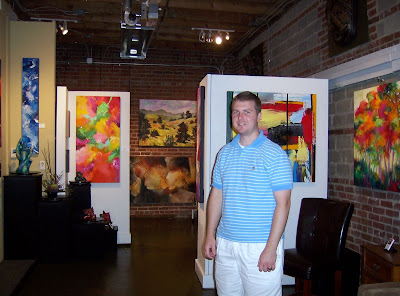 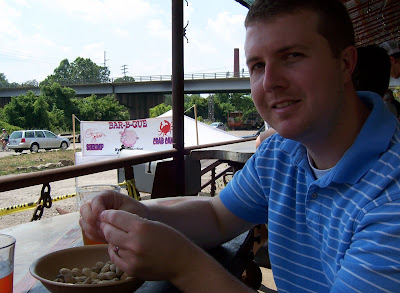 From here we went to check in to our room at Hotel Indigo, located in downtown. The lobby and rooms were just beautiful! After a quick nap (remember we are sleep deprived parents) we headed back out for tapas at Zambras where we shared in some more VERY delicious dishes! After dinner we strolled through the streets of downtown Asheville where we happened upon Shindig on the Green, a free bluegrass and folk music festival held throughout the summer. We sat down to enjoy a couple of songs before moving on to more fun in downtown. 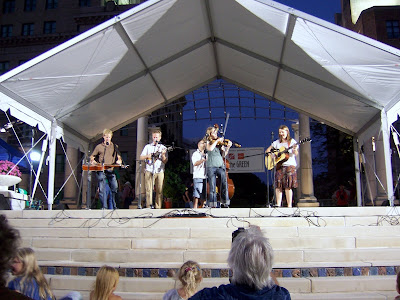 The next morning we did a little more walking around and a bit of shopping in downtown before lunch at Carmel's. Somehow each time we visit Asheville we seem to end up at Carmel's for lunch on our last day.
Our next stop was extremely top secret. Craig drove us out to Barnardsville, in the middle of no where to this place... 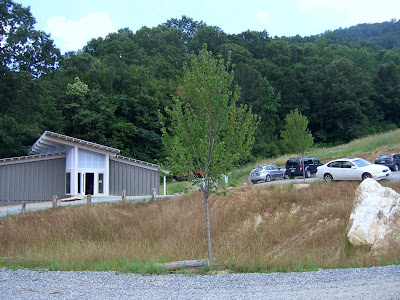 The only clues Craig gave me before going were that it required that I wear either pants or long shorts and that we would be outdoors. My mind was racing with the possibilities... although after much contemplation I made my mind up that we MUST be going horseback riding. BOY, WAS I WRONG!!! Once there I am told that we are going on a Navitat Canopy Adventure! Most DEFINITELY NOT horseback riding, but still VERY exciting!!! Apparenjtly Navitat is brand new, only opening this past May. The course has 10 zip lines--the highest one is over 200 feet off of the forest floor; the longest one stretches over 900 feet; and on the fastest one zippers can reach speed of about 35 miles per hour! IT WAS AWESOME!!! 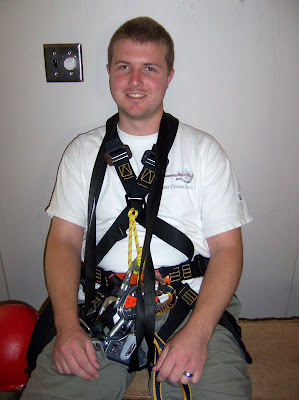 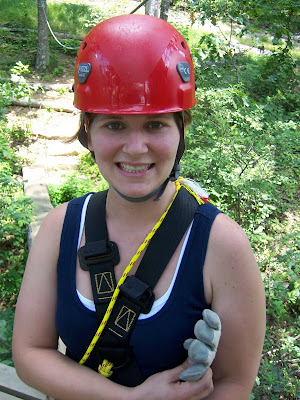 On a lot of the zips you couldn't see the platfom on the other end... you just had to put yourself out there in faith! 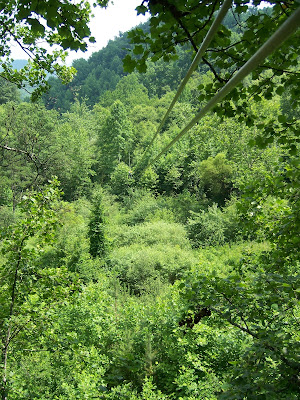 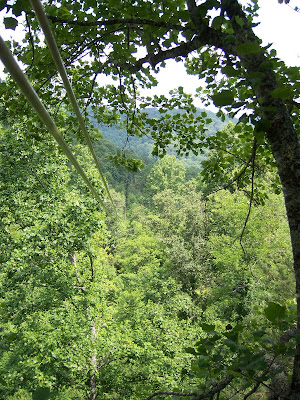 Craig zipping in for a landing! 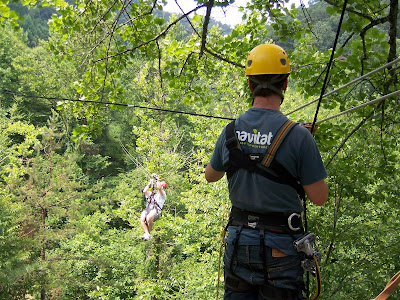 I must say, eventhough this Wednesday will mark 3 years of marriage for us, we're still far from being an old married couple! 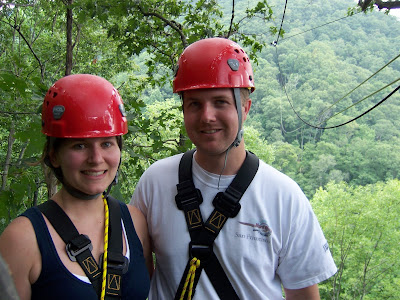 What an awesome weekend full of AMAZING surprises! What a cool husband I have!
Posted by Alanna at 2:19 PM

How funny! We are also going to Asheville for our anniversary this weekend!!! . . . however, I will not be doing any zip lines! :)

i LOVE asheville! enjoy your anniversary weekend! too bad we didn't pick the same weekend... we could have met up :)

Ahhhh that looks so fun! I have been wanting to go on a zipline! I think we may try to in St. Lucia on our honeymoon!!

it REALLY was so much fun! and it would be so cool to do it somewhere tropical in the rain forest!