Last Friday Bailey turned 6 months old! It truly is hard to believe how fast she's growing! All I can't think to say is WOW!

What BIG changes we've noticed with Bailey over the last month! Bailey is talking up a storm and can even say "Ma Ma"!!! We've not noticed any other words yet, but she's definitely making a supreme effort! She is eating solids three times a day and in general she is a very eager eater! Her eating has slowed down some in the past couple of days, but she's getting ready to have a few more teeth come in so I think that's the main reason for this. We've tried starting her on a sippy cup with water. She seems to love water, but she hasn't quite figured the whole sippy cup thing out. Bailey is now sitting up, unsupported. She's quite good at this and seems to have a lot of control and balance already! When on her tummy, she will roll and scoot herself to get to the toys or other objects that she wants. She will push her chest up off of the ground with her arms and try to push off with her legs... Craig says she's revving her engine. We're trying to prepare ourselves for the day that she finally decides to take off. Bailey is getting REALLY strong... she is bouncing like crazy in her exersaucer now and LOVES every minute of it! I think this play/exercise time has definitely helped to build up her legs, arms, and back so that she can move as well as she does. Craig and I have also noticed more and more of her personality coming out, which is really cool to watch!

At her 6 month pediatrician appointment she weighed 15 lbs. 1 oz., which wasn't quite as much as I had expected. This placed her around the 30th percentile on weight. Dr. Marlow said that babies will sometimes hit a plateau weight-wise around this age because they're moving so much and starting to burn off so many more calories. I guess it's all the working out she's been doing in her exersaucer! Bailey measured 26 1/4 inches, which places her around the 60th percentile. She's definitely grown! Dr. Marlow gave us the green light to gradually start with some non-pureed solids. She also gave me some tips for helping Bailey figure out how to use her sippy cups.

So here are a few pictures of our growing girl... 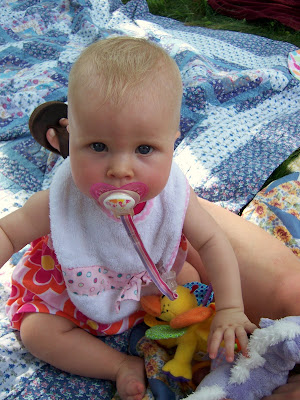 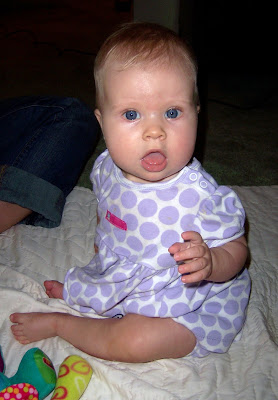 Look at those BEAUTIFUL blue eyes! 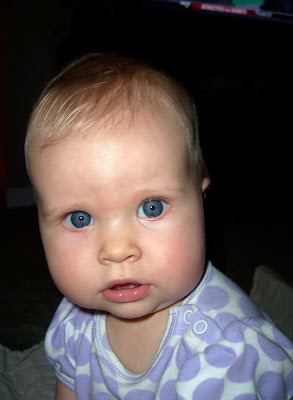 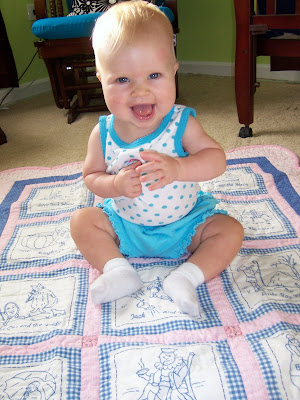 Preparing for take off 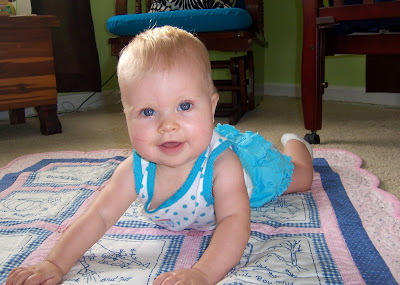 She is sooooo precious! And I see the quilt my mom made! She is such a happy baby!!!!

She IS so cute! How exciting! I love reading about it to see all the fun things we have to look forward to!