Craig and I, along with his mom and uncle, went to see Marley & Me over the Christmas weekend. What a good movie it was! I truly can't say enough about Marley & Me. I think anybody--animal and non-animal lovers alike--would LOVE this movie. 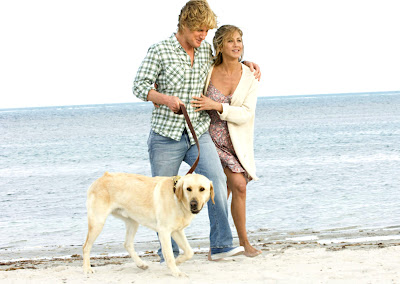 I can't tell you how many times Craig and I looked at one another, knowing that we had experienced a similar "Marley moment" with Sydney. I guarantee you will laugh, probably cry, and leave the theater with a deeper appreciation for your family--human and otherwise! Definitely a two thumbs up movie!

Upon arriving home we were greeted by Sydney, sweetly wagging his tail as we opened the door to Craig's mom's house... what an adorable sight, especially considering the movie we had just seen. The only problem was that we had crated him before we left... in the same crate he spends 7-8 hours in every day while Craig and I are at work. Apparently Sydney had a "Marley moment" while we were at the movie. Somehow he managed to bend the frame of his metal crate, which caused the front side of the crate to collapse inward, giving him his freedom. He then proceeded to tear his bedding into hundreds of little pieces and break two large chunks off of the plastic tray that lines the bottom of his crate. Thankfully, nothing else in the house was disturbed. I wonder if he's trying to tell us that he's getting too old for the crate?!?
Posted by Alanna at 7:44 PM