Craig and I began our weekend Thursday evening by going to Abingdon, Virginia to the Barter Theatre. This time was saw a play called "Comin' Up a Storm." While the play was very good, I must admit that it was not a funny as I had built it up to be in my head. Even with the slight disappointment we managed to have a great time.

Friday was Craig's 26th birthday! We were so lucky to be able to celebrate his birthday with my sister Erin and our friends Jared, Melanie, and Brett who all came to stay with us for the Labor Day weekend!

Saturday we all went whitewater rafting on the Upper Nolichucky River in Erwin, Tennessee. Thanks to the heavy rains we had last week the river was absolutely at it's best! This trip consisted of 10 miles of class 2-4 rapids. Out of the four groups on the river that day I have to brag and say that our group was the only one that did not have someone fall out of the raft... unintentionally that is. Several of us became Nolichucky swimmers after being pushed out of the boat by the sneaky person sitting next to us! Jared and I took turns "riding the bull" which is when you ride on the very front of the raft while going over a rapid... extra style points were earned by throwing our arms up when we crossed the waves. Needless to say we all had a great time. Unfortunately we weren't brave enough to try taking the camera on the river with us, so the only pictures we have were taken after we got back and got cleaned up. Here's a picture of our group with our guide John (in the red shirt) standing in the middle. 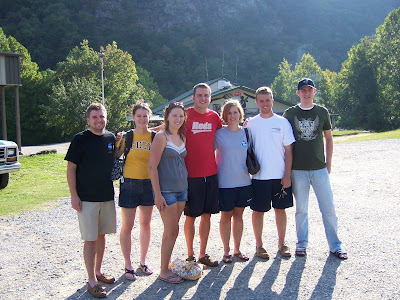 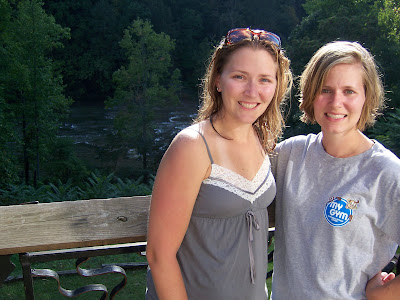 Sunday we decided to wear out our lower bodies as we had worn out our upper bodies rafting the previous day. We all went biking down the Virginia Creeper Trail. The scenery was beautiful as usual. I think by the end of the day we were all wishing we had padded biking shorts like Jared wore. 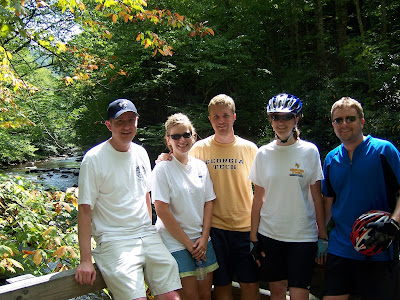 We rounded off the weekend by having a few drinks on the newly revamped patio, catching up with each other, and recovering from all of the strenuous activity over the past two days. All in all it was a great way to spend the holiday weekend! Too bad it's back to work tomorrow.

Happy Birthday, Craig!!
I'm so glad you guys finally got to go rafting! I know you have been wanting to for a while!